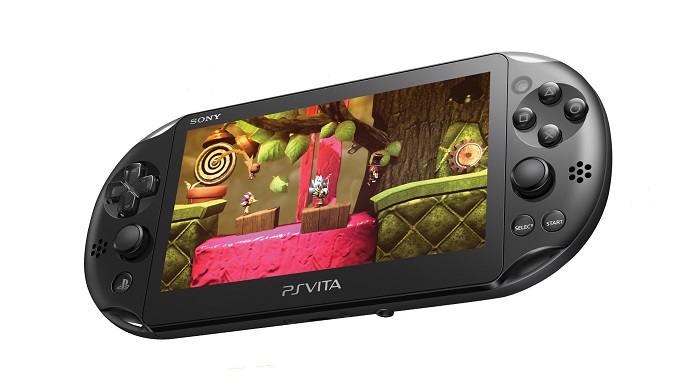 With the Nintendo Switch and next gen handheld gaming on the horizon, should Sony make Vita 2.0? It’s no secret that the PS Vita has been treated as the forgotten step child by Sony and the sun is starting to set on the aging system. Will the console’s legacy end quietly or does the Vita still have a chance for a comeback?

Full disclosure, I am a Vita enthusiast and have happily owned my system since it released. I dropped the full amount for the system, a little more for the memory cards, popped in Persona 4: Golden and haven’t looked back. As Colin and Greg from Kinda Funny Games would say, I am a card carrying residence of Vita Island. The PSP successor, ignoring the PS Go, PS Vita was ahead of its time and gone too soon.

Despite it’s slow decline and cult following, I’m here to talk about why Sony should make Vita 2.0.

Even with lukewarm reception, the Vita was a work of art. It had a sleek design, two analog sticks, pretty OLED display and could fit comfortably in your hands, pocket, bag etc. Since PS3 was the current gen system at the time, being able to produce PS2 level graphics on the go was no small feat. In comparison to the 3DS, which is a great system, it is surprising to see who ended up the ultimate victor.

If Sony changed some outdated features like removing the back touch controls and update the internal components, the current Vita design could still work. The Switch mobile screen looks very similar, minus the analog sticks, so the Vita 2.0 has a shot.

Momentum Is Strong for Mobile Gaming

Despite many adults owning a PSP and/or Vita, in the US owning a handheld gaming device can be seen as childish. If you look at the many ads for handheld games they are dominated by 3DS cartoon-like games directed to children. Don’t get me wrong, those Pokemon Sun and Moon commercials were for me too. But if you are a grown up, not into Pokemon, Yokai Watch, Story of Seasons etc. then a handheld device may not appeal to you as a product.

The Switch has made it look “cool” to take your platform on the go. Nintendo may have dominated the handheld space but that doesn’t mean some healthy competition isn’t good for the consumer. Vita 2.0 could have a chance since the climate for mobile gaming has improved.

New Games Are Coming To Vita In Japan

Even though the Vita hardware sales stalled out in the states, it is doing pretty well in Japan. The Vita receives a steady stream of games which, through localization, have helped to retain its life despite Sony doing all it could to kill it. The Vita PSN store is littered with JRPGs and other niche games, like the Danganronpa Series, that would not otherwise make it to the states. Catering to this market has carved out a nice audience for current Vita supporters in the states.

Since the Japanese player base has continued to expand into mobile gaming on phones and handhelds why not tap back into that source? While it wasn’t planned, Vita 2.0 could market itself as a system that offers unique experiences to gamers.

Sony Learned From Past Mistakes

Sony recognized that they made some missteps with their previous console, the PS3, and gave us the PS4 as an apology. The marketing push of the PS4 being “for gamers” allowed me to trust that they got their act together. The Vita, just like the PS3, had too much going on. It wanted to have gimmicks so it had screen touch controls, back touch controls, remote play possibilities, cross play possibilities etc. It also had two versions that offered different internet options at launch, Wifi and data plans. You name it and Sony tried to fit it on the Vita.

The other costly mistake were the memory cards. The price could go into the hundreds for the biggest size of 64gb via Play-Asia and was only available from Japan. Additionally, the internal memory space was trash, the original units didn’t come with a memory card or, if it did, it was only 4GB. Sony created a horrible bid for consumer dollars because the barrier to entry was too high. If they made Vita 2.0, judging from the PS4 marketing strategy, they wouldn’t do the same thing again.

It’s All About the Games

The Switch launch trailer shows that Nintendo has 3rd party support signing up. Their first party offerings, Mario, Smash Brothers, Zelda, etc, can make it a “must buy” for fans of those titles. It may even be fair to say those IPs are the main reason Nintendo is still in the console conversation. Nintendo had some tense moments with 3rd party developers over the years so it will be interesting to watch the company adapt to the times via the Nintendo Development ID program.

Sony has their own impressive stable of developers and a thriving Indie scene. The Vita started off strong with Killzone, Gravity Rush and Uncharted: Golden Abyss so it can be done. Thinking about how hard developing games for PS3 was rumored to be and the PS4 being the complete opposite, the “gamers and games first” logic should be passed down to the Vita 2.0.

The Switch’s release opens the door for the Vita to be viable in the market. With the growth of mobile gaming in the West and the push toward a more mature handheld audience, Vita 2.0 could offer great competition. If Sony does not repeat the sins of the past and continues to support their peripherals, a new Vita could be just as successful as the PSP. The probability of this happening is slim but we can always dream right?

Let me know what you think in the comments below. Are you a Vita Island resident? Do you think Sony should let Nintendo keep the monopoly on the handheld market? Do you think a new Vita would pass or fail? All opinions are valid here.

Until Next Time guys

Games With Gold, PS Plus Freebies For January 2017

Author NerdyGamerNerdPosted on July 1, 2015October 2, 2019
Lara Croft GO E3 2015 showed us not one but TWO new Tomb Raider games to add to the long on-going franchise, these two...
Read More

Author Marta BrancoPosted on February 15, 2014October 13, 2019
Scrolls The Elder Scrolls Online (TESO) is definitely one of the most anticipated games of 2014. Even though the hype is currently global, the...
Read More

5 Reasons Why You Should Pre-Order Blackwell Epiphany

Author Nick ConnorPosted on July 27, 2015January 30, 2017
Hearthstone‘s next expansion, The Grand Tournament, is bringing plenty of new cards to the game for bold new ways to play.  The main focus...
Read More

6 Games To Get Excited For This Autumn/Winter