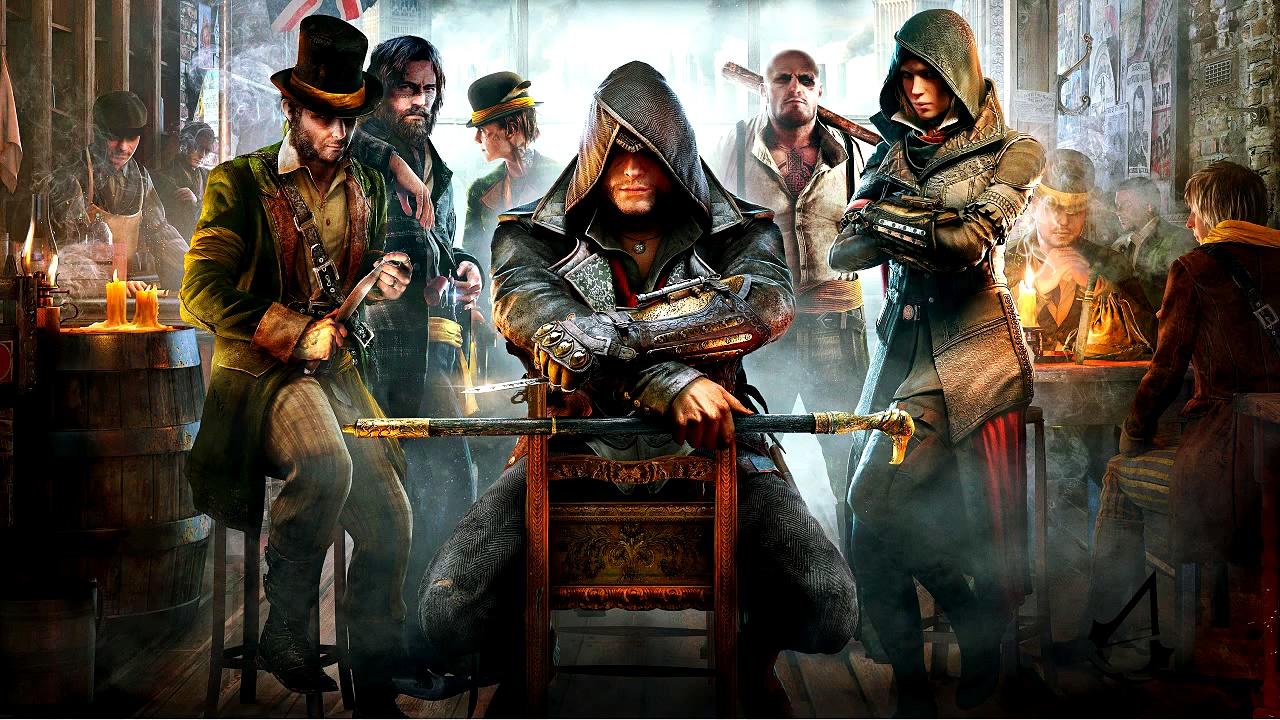 Assassin’s Creed Syndicate requires tons of money in order to unlock and upgrade almost all gear in game. Money is also required to buy utility supplies. By other words, money commands your power force. The thing is, becoming rich in Syndicate is not as simple as it seems.

Skill points are clearly the main combat element in game since they determinate your characters’ skills and power abilities. However, skill points won’t work as expected without certain gear and advanced upgrades. That’s when money comes to take its primary role in game. To acquire new weapons, armor pieces or even utility supplies, players need large amounts of pounds (Syndicate’s money). Despite being quite complicated to become rich in a short amount of time, you can easily get a lot of money by following the tips in this guide.

Note: This is a progressive guide. As you progress, some steps will become automated either by skills or by repetitive play. 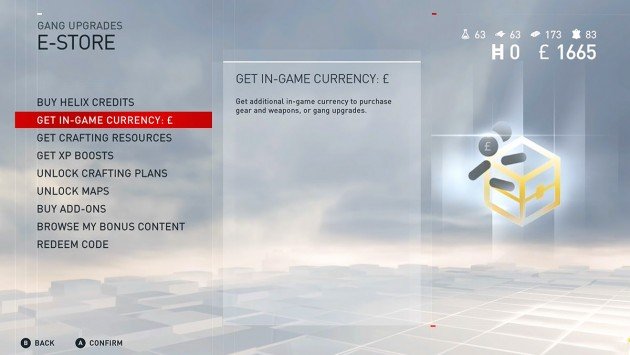 I’ll start with the easiest and quickest way to get in-game pounds. Simply access the Ubisoft e-store in-game while having some coins and click on: Get In-Game Currency: £. Also, if you’re looking for specific items such as crafting materials or experience boosts, you can directly purchase them from the store. 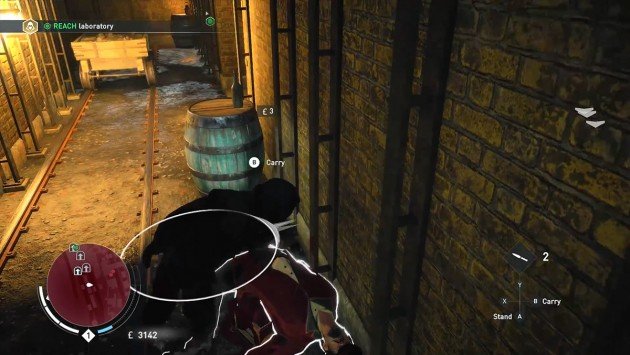 At the beginning of the game, one of the main tricks is to loot everyone you kill. It can become bothersome sometimes but don’t worry you’ll be able to acquire an auto-loot skill after some levels (named Loot Takedown in the Stealth tree). Looting corpses will often give you free pounds (normally no more than 20£ per loot) and a few random utility items. 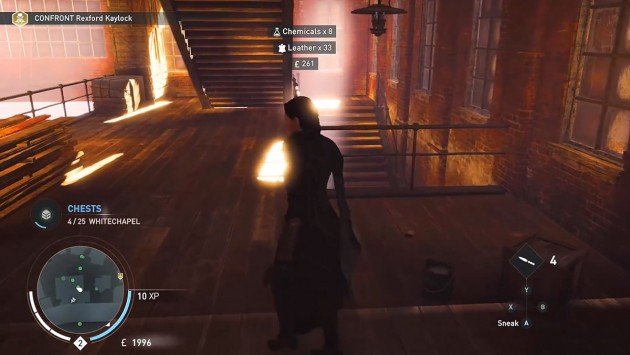 There are hidden chests all over London, all you have to do is locate them through your map. The chests are explicitly marked with a chest icon, so all you have to do is check in which level they’re placed. Normal chests contain medium amounts of money, as well as other useful items such as crafting materials. Locked chests contain better rewards, so don’t miss any of them. 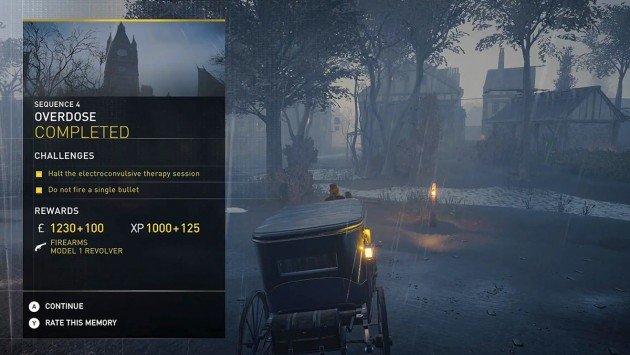 Probably the most ordinary way to get money in action-games is to complete story quests. Mostly because they don’t just give experience, they also reward you with some great amounts of money. In AC Syndicate, the main quests are called Sequences and they’re marked as yellow symbols in the map, make sure to complete them as soon as you can.

5. Unlock the Scavenger and Lock-Picking Abilities 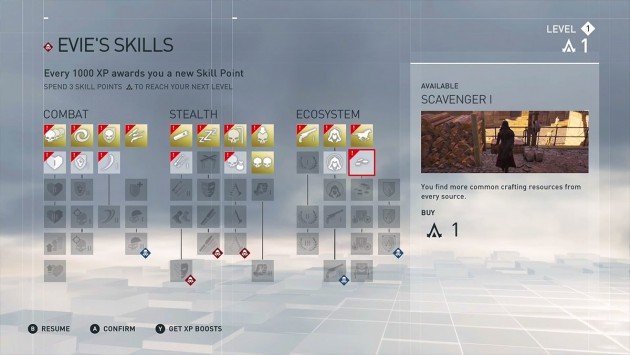 In order to generate more income, you should unlock certain abilities in both Jacob and Evie. To get more and better loot from every resource you need to unlock the following skills: Scavenger I and Scavenger II in the Excosystem tree and the Lock-Picking I and Lock-Picking II in the Stealth tree. While the first allows you to get more income from each resource, the second will allow you to lock-pick high chests and doors that might contain hidden rewards. 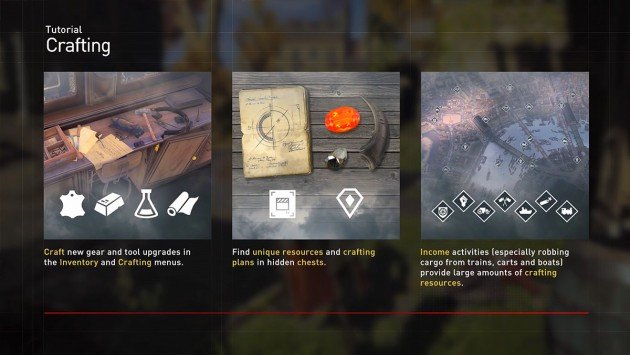 Completing income activities all across London will put some extra pounds in your pocket. If you really need some quick money, open your map and look for nearby income missions, which can be displayed differently depending on their goal. The most common and rewarding ones include robbing trains, boats and carts. Besides money, players will often get crafting materials. 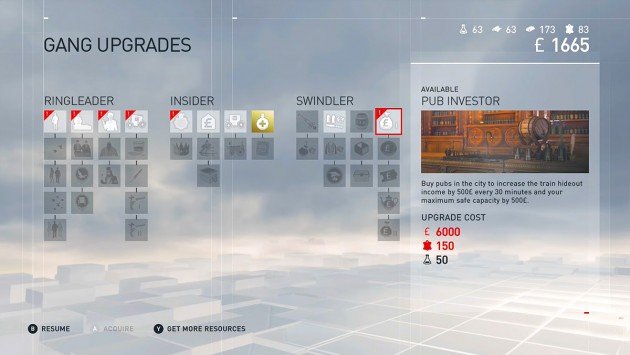 To ensure that your faction will prevail, at least in terms of currency, you need to unlock the Pub Investor chain in the Gang Upgrades Swindler tree. These skills will allow you to literally buy pubs in London and start business points, which will increase your hideout income by 500£ every 30 minutes. The subsequent upgrades will also generate more pounds, such as the Pub Games, which allow you to sponsor football-street games and increase pub users, thus more money. 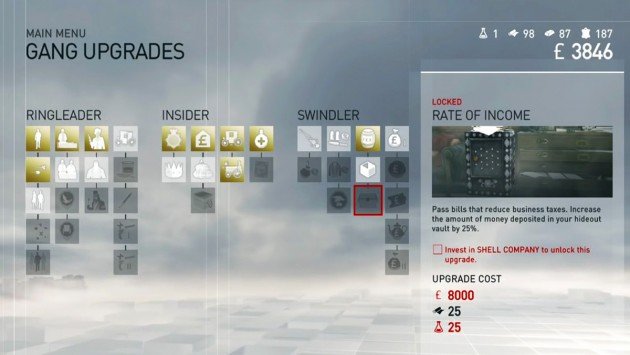 This is another way to generate tons of money by using your Gang Upgrades. This time you should get the Shell Company and Rate of Income abilities, both from the Swindler tree. The first allows you to increase the payout from all income activities, while the second reduces your bills and increases your vault capacity by 25%. 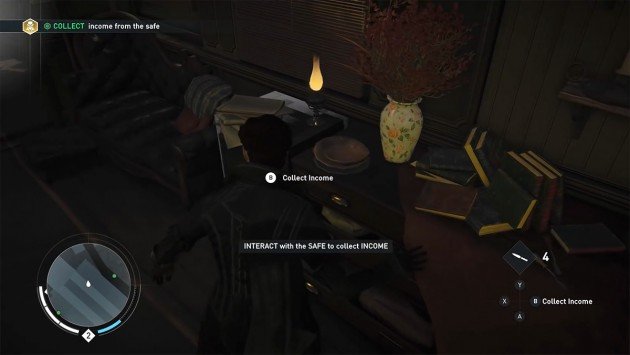 To make the previous two tips more effective, you need to regularly collect your hideout’s safe. Gang activities will generate money, even if you don’t upgrade it at all. However, to obtain that money you need to visit your train and collect the accumulated cash directly from your personal vault. 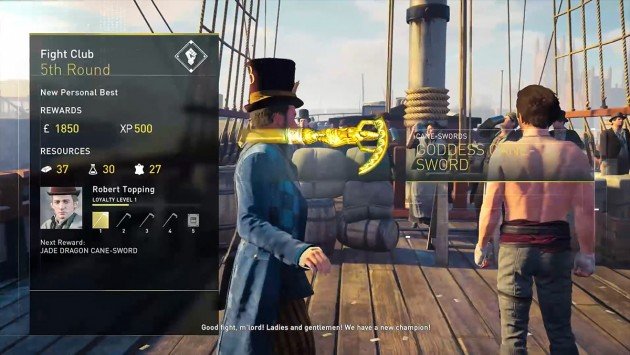 The ultimate method to make quick and easy money is to beat the Fight Club Challenges. If you successful go through all the waves, you’ll end up with an astonishing reward – loads of money, crafting materials and sometimes even gear pieces! Note that each Fight Club NPC has a loyalty bar, the more you fight the more special rewards you’ll get upon beating the challenges.

NBA 2K16 Small Forward Build: How to Build the Best SF in the Game

Dying Light Tips & Tricks: How to Kill Without Killing

Author Marta BrancoPosted on January 30, 2015October 10, 2019
Dying Light Dying Light allows different play styles and one of them is to go around without killing at all. Besides parkour and mobility...
Read More

Author Marta BrancoPosted on November 13, 2015November 22, 2019
Paladin Danse wants you to investigate a missing squad case in the east part of Commonwealth. It’s no coincidence that the Brotherhood of Steel...
Read More

Author VgamerzPosted on March 12, 2014October 12, 2019
Dark Souls The Last Giant is the first boss fight you will encounter in Dark Souls 2 and even though it’s not a terribly...
Read More

Rage Of Bahamut Tips and Tricks for a Better Strategy

Author VgamerzPosted on August 3, 2012October 13, 2019
Bahamut Rage Of Bahamut is definitely one of the biggest games of this year – at least on the mobile gaming market – but...
Read More