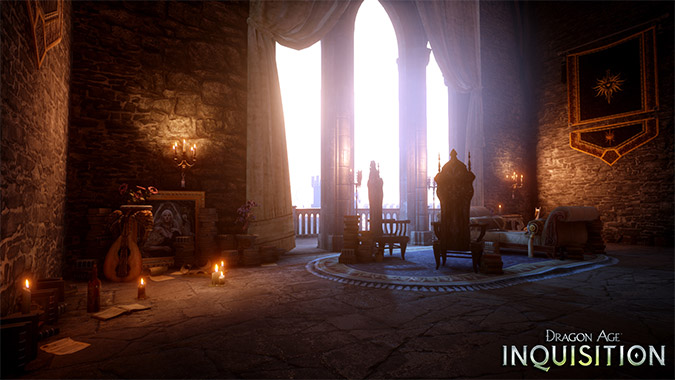 Skyhold is Dragon Age Inquisition’s upcoming base of operations and just as the protagonist himself, this location will be dynamic and progressive. Today, BioWare’s producer Cameron Lee has unveiled extensive details about this fortress claiming that ‘Skyhold is filled with interesting places to visit.’

As expected, the Inquisitor’s lair is going to be densely customizable. Players will be able to collect or purchase indoor and outdoor items to decorate their own Skyhold. Also, as the story progresses the fortress will visibly evolve by becoming larger and more detailed. Lee revealed some of the many items that will contribute towards a deeper and complex customization:

Skyhold can be customized to reflect what sort of Inquisition you’re leading. You choose what to do with major parts of the castle such as towers and the courtyard as well as decorations like statues, windows, drapes, furniture, and even the heraldry your Inquisition forces will take into the world.

Skyhold is gigantic, literally. It will have all the proper places that a fortress should have and probably the most interesting part, each major character will have his/her own room. Besides that, the Inquisitor will be able to find and interact with all his followers, major ally representatives and imprisoned enemies within the walls of Skyhold. It’s indeed a huge small world, as Lee explained:

Skyhold is filled with interesting places to visit! There’s a tavern where Inquisition followers are having a drink. A dungeon with your defeated enemies rotting away. Your throne room, where you’ll pass judgment on your enemies (but we’ll get more into that later). There’s a large library with a research assistant, and a garden where you can choose which plants to grow for making potions. Other locations you can visit include a vault, kitchen, guard tower, rookery, training ground… and that’s still not a complete list of all the places you can visit.

But that’s not all, the Inquisitor will have his personal war quarters, where all type of war strategies will be discussed. In this room, players will be able to craft, upgrade and enchant items, as well as check the world map to see what’s happening around the world and whether his/her agents have reported any new leads on the Elder One.

Author Daniel PricePosted on June 29, 2015October 5, 2019
The Deus Ex franchise has turned 15, with the release of the very first game landing for PC more than a decade ago. The...
Read More

Author VgamerzPosted on May 4, 2020
When dealing with Nintendo consoles there’s a particular part of online play which can be annoying. Friend codes. Every user is given a unique...
Read More