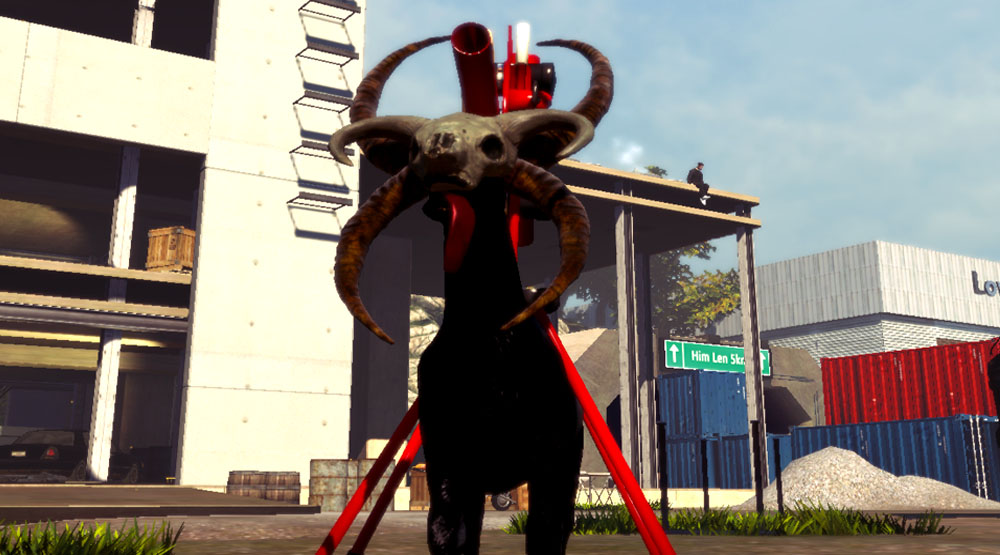 The human imagination is indeed fruitful. It’s not every day that you see a goat game being released worldwide. But Goat Simulator is no ordinary animal game. In this bizarre reality, players must evoke their darkest wishes and destroy everything around them using just one tool, a goat. Yes, a goat. This terrific mammal is capable of unimaginable destruction and this simulation represents the true power of goats in a very entertaining and hilarious way.

1. Aesthetics: The Art of Destruction

It really surprised me to see Goat Simulator powered by the Unreal Engine 3. Mostly because the game is so amusing that it looks strange to visualize such comedy in the shape of stunning graphics. The overall map is relatively small but most of the environmental scenes are quite detailed and realistic. On the other hand, I’ve noticed that some small objects lack definition but that’s probably part of the “small, broken and stupid” game description from Coffee Stain. The special effects and lightening are generally well displayed and I particularly enjoyed seeing my burning goat flying around like a living jet. Besides, most of the environment is interactive. Players can really change the appearance of the world by breaking glass, destroying objects, killing people or even exploding cars. At the end of a playing session, it’s hard to recognize the initial town. It’s as if a hurricane passed by and destroyed every single object.

Goat Simulator has a very intuitive and simple gameplay system. It’s not like there is a lot to do, so it would be hard to make a complex gameplay. Anyway, the main goal in this title is to explore and destroy things; you basically earn points by licking and destroying anything. But there’s more, there is an extensive list filled with challenging tasks. Some of them are related to secret zones or activities that players must find themselves through exploration and experimentation. Now, I didn’t expect such a deep concept in this game but I must admit it’s quite thrilling. Furthermore, Goats can be slightly mutated if they accomplish special tasks. Becoming a demoniac goat, robot goat or even a space goat is part of innumerous mutators in-game. Some of these transformations grant special skills that will strengthen the chaos, for example the demonic goat has a magnetic skill that attracts all objects and players.

Innovation is all over this game. After all, it’s the first simulation of goats, thus the best so far (because there’s no other for comparison). It would be particular sad if the game’s theme was to be the only innovation here. But it’s not the case. In game, there are multiple creative features that reproduce reality in an accurate way, such as backflips, kicks, licks and dragging/smashing things with the holy goat horns. The mutator system is also a great innovation that very few expected to find. Being the goat king or playing mini-games using your tongue doesn’t seem that exciting but aren’t they totally original?

When it comes to performance things change drastically. The game is very buggy and sometimes the only way to keep playing is to enable the unstuck option and respawn elsewhere. Some animations can malfunction at times too and the map’s border is extremely annoying, since you practically get stuck between a real and a virtual wall, if you end up getting there by any chance.

Overall: If You’re Depressed Then You Really Should Play Goat Simulator

Goat Simulator is definitely a title to play if you’re looking for a good laugh or simply an entertaining experience. There’s nothing complicated or deep about it; you’re a destructive goat unleashing chaos in town. The thing about simple things is that they can become tedious very fast but then, this game hasn’t been made to be played every day. I would rather perceive it as a momentum game that can lift your spirits in no time, especially if you’re feeling down. After all, it’s not every game that allows you to be a living hurricane.

Cons: No story or narrative; Short and repetitive content.

Fallout 76: A Story of Failure and Deceit

Author VgamerzPosted on November 2, 2019November 19, 2019
Fallout 76 Fallout 76 has gone down in the history books for all of the wrong reasons. Bethesda promised so much for their newest...
Read More