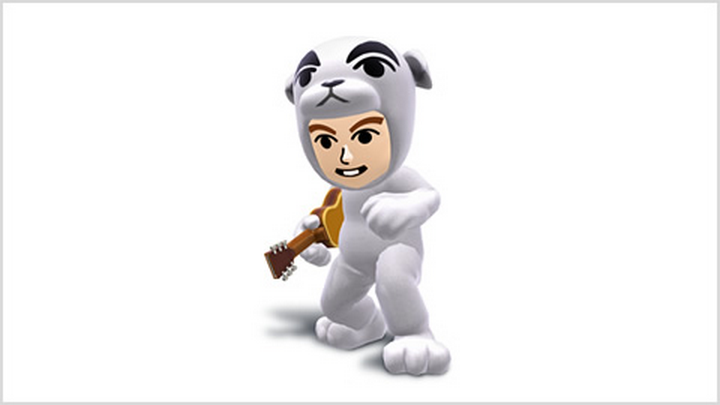 It looks like the next batch of downloadable content for Super Smash Bros for Wii U and 3DS is gearing up as a new Mii Fighter costume set was revealed on the official Super Smash Bros website.

This new outfit is based on the musical canine K. K. Slider from the Animal Crossing series.  The new costume is bizarre enough with its appearance alone, but it gets stranger given the fact that it is meant for the Mii Gunner.

Apparently, you’ll be blasting your opponents by strumming your guitar at them while dressed in a dog suit.  However, only the suit is restricted to the Gunner and the mask, included in the package but a separate item from the rest of the costume, can be worn by any type of Mii Fighter.

What are your thoughts on the K. K. Slider outfit?  What other costumes do you hope to see included with this and the previously revealed Inkling costumes in the second DLC collection?  Leave a comment below and let us know what you think.

Why Bloodborne's Patch 1.04 Is Fundamentally Damaging

Author Simon O'NeillPosted on August 10, 2016November 29, 2019
With Final Fantasy 15 on the horizon, eagerly awaiting its chance to disappoint the world after ten long years in the oven, one man...
Read More

Author VgamerzPosted on August 26, 2014October 11, 2019
Dead Game The Walking Dead Game: Season 3 has been announced during the San Diego Comic Con in July and I am sure that...
Read More

The Division gets New Gameplay

Author Ethan HornPosted on June 9, 2014October 11, 2019
Division The Division got it’s first gameplay trailer since last E3 during  Microsoft’s press conference. As a reminder, the games story revolves around a...
Read More

Author Marta BrancoPosted on September 12, 2014October 11, 2019
Destiny Destiny is being targeted by hackers and several applications have already been successfully made to disrupt the game’s normality. As NowGamer reported, an...
Read More