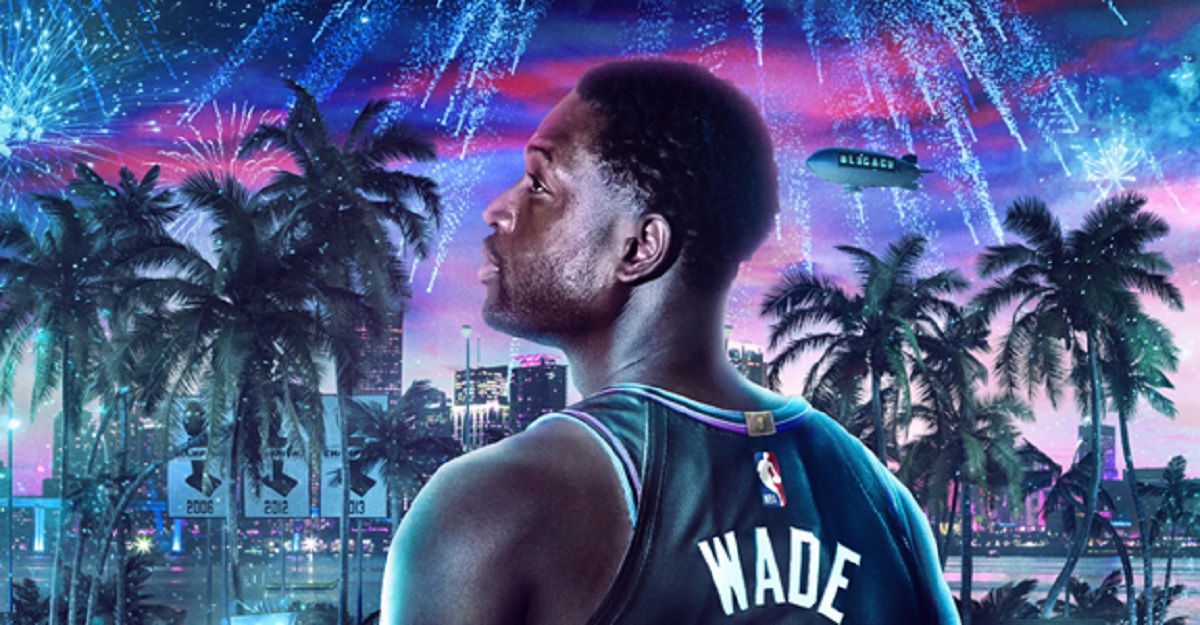 NBA 2K20 is the latest of 2K Games’ annual basketball simulation series. Expectations going into yearly released sports games are not overly high. Limited development time tends to lead to repetitive and uninspired products. Given this, it’s actually an impressive feat how poorly NBA 2K20 has been received. People aren’t wrong to hate though. This is one of the worst sports games ever made. 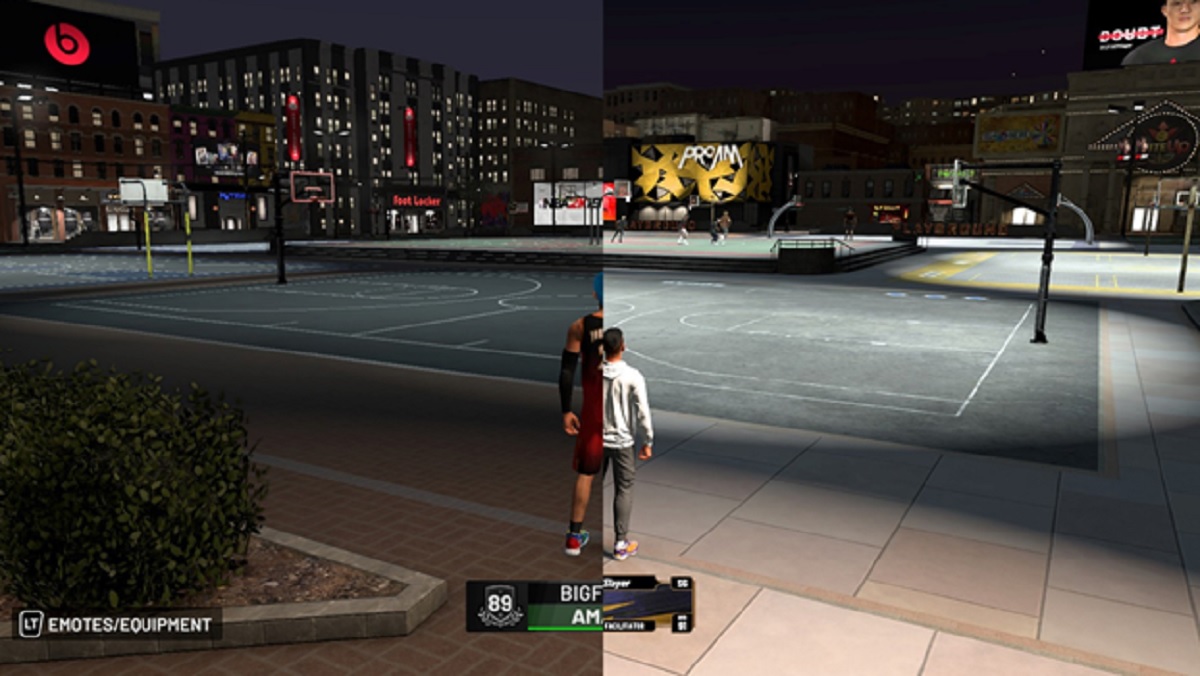 NBA 2K19 and 2K20 next to one another. It’s frightening how well they line up.

MyCareer is NBA 2K20’s largest game mode and the primary focus of development. It’s your standard create a player and live an athlete’s dream experience. Considering this is supposed to be NBA 2K’s primary game mode, the lack of innovation is concerning.

A big selling point leading up to release was NBA 2K20’s new approach to archetypes and badges. 2K Games promised the archetype system had been abolished and replaced by an open choice player creator. The reality? Not exactly true.

The new pie charts system has you select a build based on its overall strengths. If you want a build that focuses primarily on shooting and playmaking, you can do that. Unfortunately, likely due to gameplay balance, this ends up operating very similarly to archetypes. An NBA 2K20 Inside-Outside Scorer isn’t any different to an NBA 2K19 Slashing Sharpshooter. Different name, same outcome. That’s a reoccurring theme of this entire game.

To the developer’s credit, the new badge system is very nice. Players are free to tweak badges to suit their own specialty. I have an Inside-Out Facilitator with Hall of Fame Catch & Shoot. This lets me be a primary slasher with a secondary focus on three-point spot shooting. Alternatively, I could have invested badge points into Difficult Shots and gone for a shot creator type. Earning these badge points can be a little slow but long-term this system seems to be an upgrade. 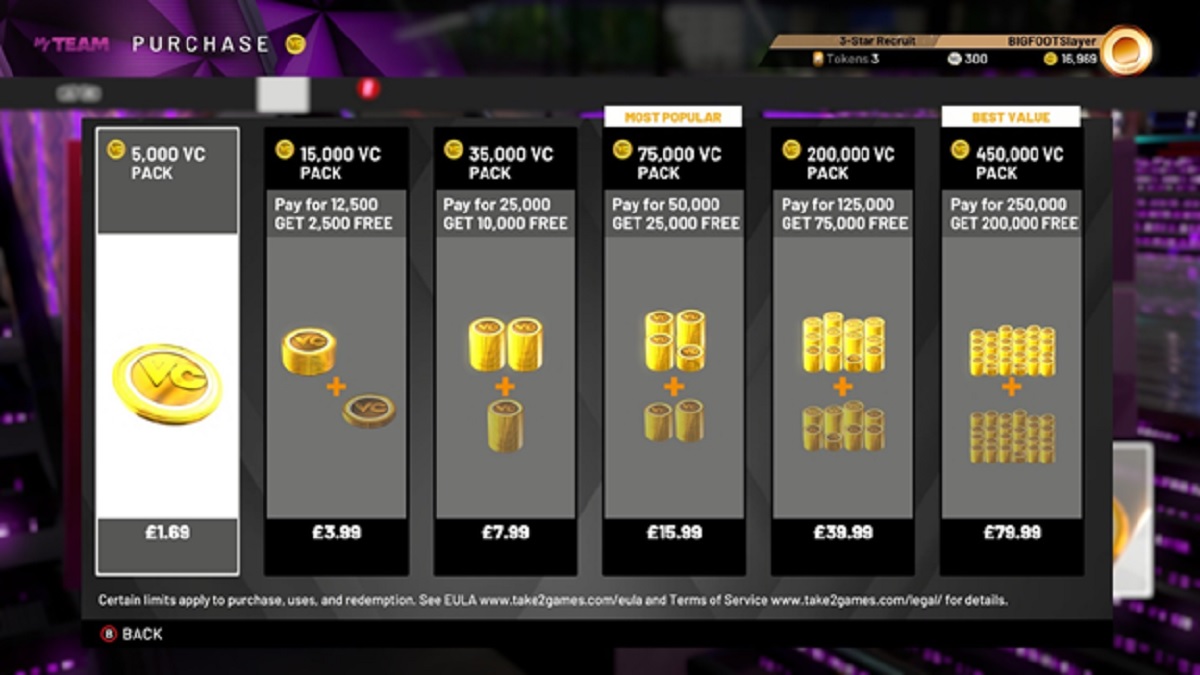 Naturally, as with just about everything 2K published game, we need to talk about the business model. It’s bad. Player progression is still tied to Virtual Currency (VC) and VC is far too difficult to get legitimately. Marginally improved endorsement offers help somewhat but the grind is still painful. It’s clear that MyCareer is designed to make you cave in and hand over your credit card.

A lot of reviewers miss how awful this practice actually is. Think about it this way. If you go into a Park or Rec game on a new player without spending money on VC, you will lose every game. It doesn’t matter how good you are either. A 60 overall cannot hit shots, cannot defend, is very slow and lacks fundamentals like basic dribbling. You straight up don’t feel like a professional basketball player.

It isn’t just MyCareer that’s caught a nasty case of 2K virus either. MyTeam, NBA 2K20’s inferior interpretation of FIFA’s Ultimate Team, uses the ever so prevalent RNG Card Pack model. A Base Pack costs 3000 VC, around £1. Of course, drop rates in Base Packs are awful so don’t bother. A Deluxe Pack is 9375 VC, around £3. Still not great odds. So what does it cost to get favorable odds?

The Deluxe Spotlight Series 1: Dwyane Wade 20 Pack Box. Yes, that’s its real name. Price? 168,750 VC. Effectively, £35. That’s £35 for some virtual cards that become worthless as soon as the next batch is released. Talk about value. 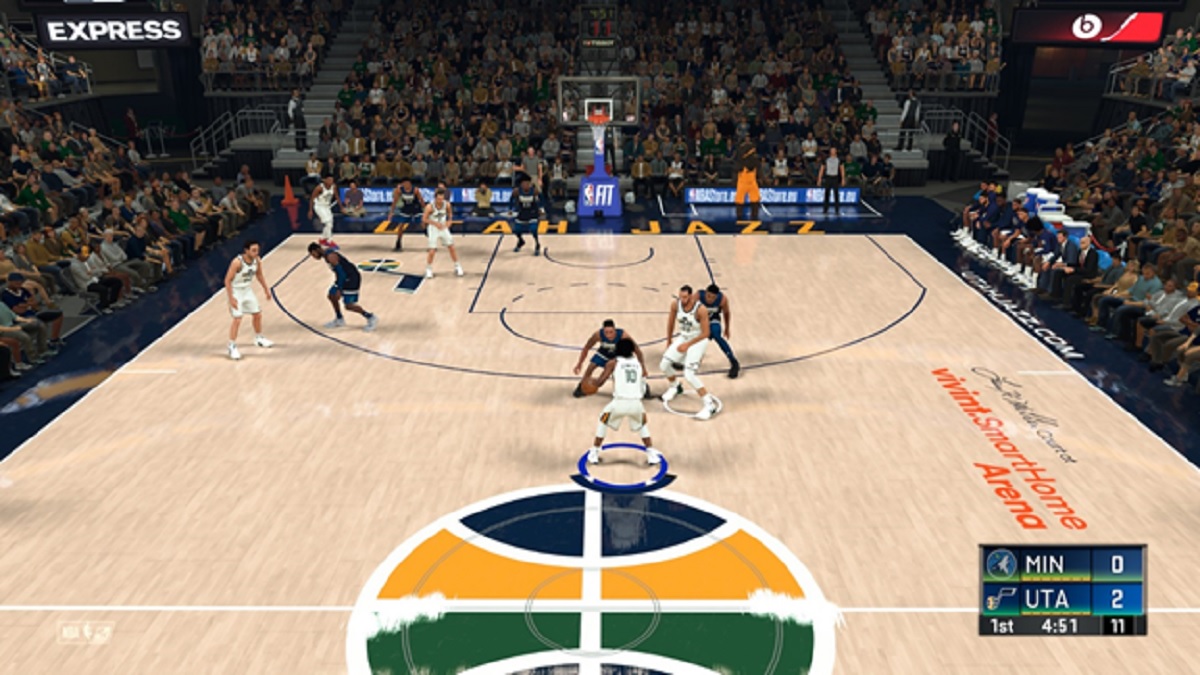 You would think by not changing your game much and keeping the same engine there would be one benefit. Stability. These assets and features have been around for two, if not three years. So how on Earth are they more broken than ever before? The loading times pre-patch were horrendous. Upgrading your player could take 2-3 minutes. Same for viewing people’s 2K Cards. Both features were instantaneous last year. A patch did drop to alleviate this somewhat, but other issues still exist.

Crashing is far too frequent. Players can get stuck in the Gatorade Training Facility due to an invisible wall in the doorway. Randomly, player progression will just stop working entirely. You can even get negative progression, effectively taking away Badge and Attribute Points from you. MyLeague Online can freeze at the end of games, not recording the result. On the PC version, they initially didn’t even bother to update the thumbnail icon! It still said NBA 2K19. How fitting.

Lazy game design is injected into NBA 2K20’s veins. I’m genuinely not convinced they play-tested this at all. I can’t even cover the majority of present bugs as there’s just too many. Judging by past NBA 2K titles, most of these will never be fixed. Probably not even by NBA 2K21.

If You Can’t Do It Right, Just Lie 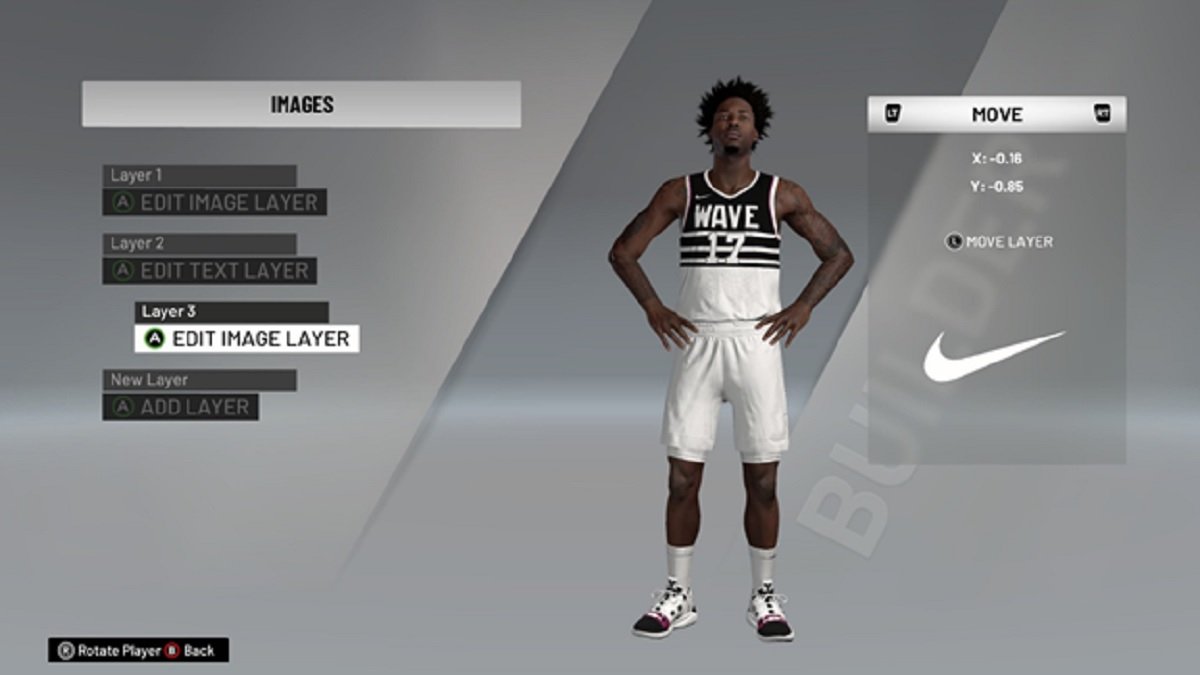 2K Community Manager Ronnie Singh has a lot of explaining to do. He’s been known in the past to lie about game features. Back before NBA 2K17 launched, Ronnie promised underwater parks in an interview with 2KTV. They never showed up and he later claimed this was just a joke. This year, he has gone above and beyond to aggressively scam gullible fans.

When called out on his stream about The Neighborhood being the same, he claimed it wasn’t. Stating that NBA 2K20 would not share the same Neighborhood as NBA 2K19. He lied. Later, when questioned about 2K’s aggressive microtransactions, he claimed you could respec builds to save VC. He lied. He claimed the team was going to add more pie charts and buff small forwards after community feedback of the demo. He lied.

An official employee of 2K sat there on-stream spouting lie after lie knowing exactly what he was doing. The backlash has been huge. Both #Fix2k20 and #FireRonnie2k were first and second on Twitter’s trending section. 2K let Ronnie keep lying because they knew full well it would trick people into buying NBA 2K20. They had a responsibility to shut down the lies but they didn’t care about us enough to bother. In their eyes, Ronnie’s lies were an act of heroism that pocketed them a little extra cash. 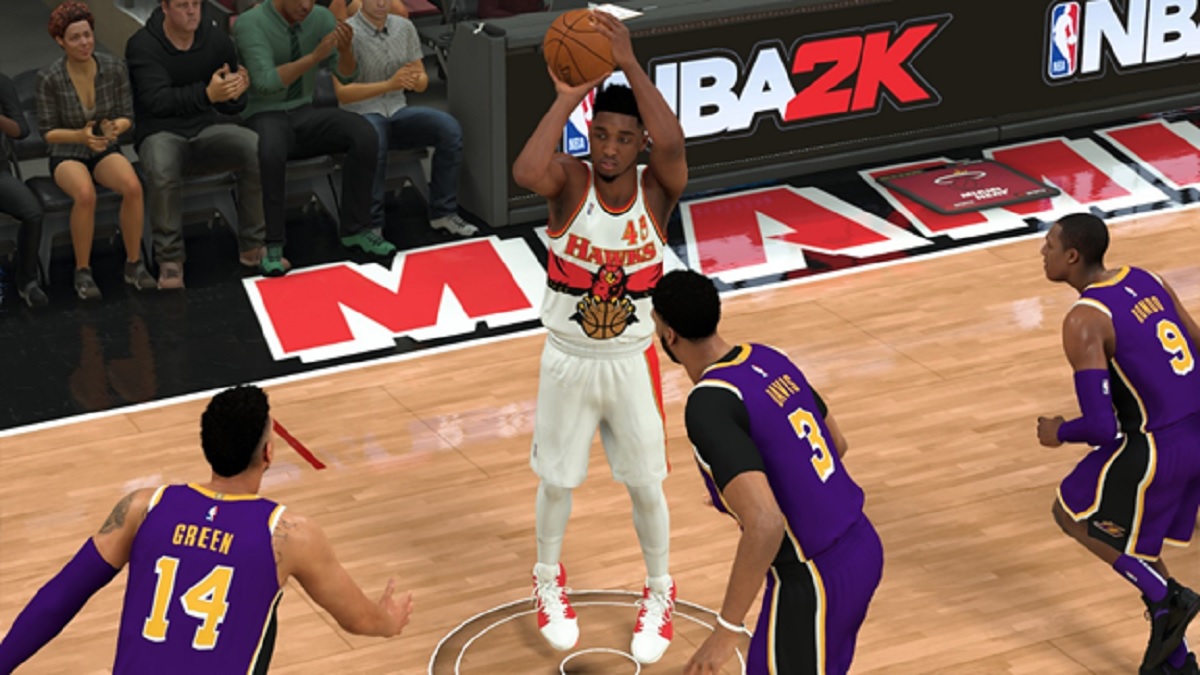 This is one of the worst sports games ever made. It severely lacks ambition and passion. It’s all too happy to take your money and leave you lying on the side of the road. I don’t believe for a second Visual Concepts will patch this game enough to make it legitimately good. Best case scenario, maybe it becomes playable in the future. Any minor improvements are greatly outweighed by the countless issues. Only the most passionate of basketball fans should even consider picking this up. Even then, I’d recommend instead just praying that EA steps up their game with NBA Live 20.

Be sure to let us know what you think of NBA 2K20 so far. Is the backlash fair or is it actually better than people are making out?

Lies and False Advertising in the Videogame Industry

Author Nick ConnorPosted on March 31, 2015October 8, 2019
Cards With Blackrock Mountain releasing its first wing this week, Blizzard has revealed all of the cards that will be added into Hearthstone with...
Read More