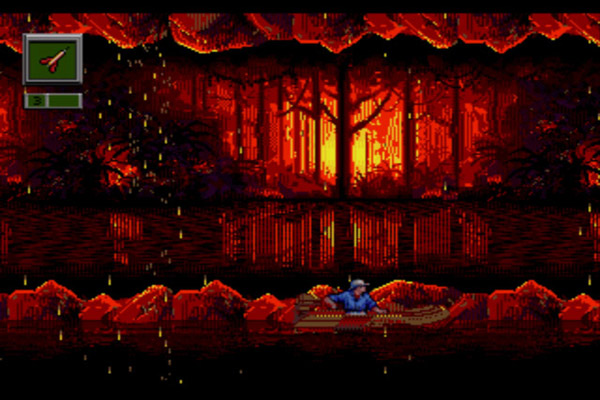 Not Operation Genesis, in which you made your own dino-park. Although that was rather great, in a ‘Rollercoaster Tycoon with claws, screaming and guests fouling themselves when the Tyrannosaurus leaves his paddock for a stroll’ sort of way.

I speak –as if you didn’t know– of the Mega Drive/Genesis release, Jurassic Park. But not just any feeble, girly edition. We’re talking Jurassic Park: Rampage Edition.

Now, this Rampage business is my one and only experience with the Mega Drive Jurassic Park. I can’t say what came before it, what may have been wrong to warrant the need for a second, now with 500% more freaking rampage version. All I know is that this was some fantastic stuff right here.

In this 1994 action platformer, you take the role of Dr Alan Grant. The helicopter he’s riding crashes just as he thinks he’s making his escape, and so Grant is thrust back into this odd prehistoric world. Although this time, he’s kicking butt. With the army and the InGen agents contesting rights to the artifacts on the island, and the dinosaurs roaming free and eating man-face at their leisure, it’s a bad time to be sightseeing.

Still, our ol’ buddy Alan makes the best of it. He must cruise through a series of stages, from the pterodactyl aviary to an inexplicable ancient city level, which is in here for no darn reason at all. It’s all charmingly 2D and side-scrolly, as you’d expect, and there’s a great vibrancy to the visuals.

More pertinently, though, there’s some real Grade A crazitude going on. You’re beset by enemies throughout; dinosaurs, army guys (the green ones) and InGen guys (the blue ones) all seem to want you deader than very dead. Fear not, though, because the oh-so-peaceful doctor from the movies is… nowhere to be seen here.

Jurassic Park: Rampage Edition is more shooter than anything. Along the way, you’ll pick up an absurd arsenal of weapons. Flamethrower, crazy electric rifle, rocket launcher, all of that fun stuff. The first two come complete with their own hilarious elemental death effects. You’ll see raptors burn to shrivelly crisps after a hit from your flamethrower, or the typical cartoon skeleton X-ray effect from the shock rifle.

What more do you need to know? Nothing, that’s what. Except that you can also play as a Raptor yourself, and bite and/or kick those blue and green dudes.

The VgamerZ Monster Files: The Zombies (Plants vs Zombies)

Street Fighter V: Who Could Be Left?

Author Nick ConnorPosted on September 13, 2015January 30, 2017
With the release of Street Fighter V drawing ever closer, the roster of fighters is coming together more and more.  Actually, there only remain...
Read More

Dying And Not Returning: Top 5 Games With Permadeath

Author FilipePosted on July 8, 2015September 17, 2019
Permadeath As I said before in my XCOM 2 article, I’m a huge fan of permadeath. If you still haven’t tried any game that uses...
Read More