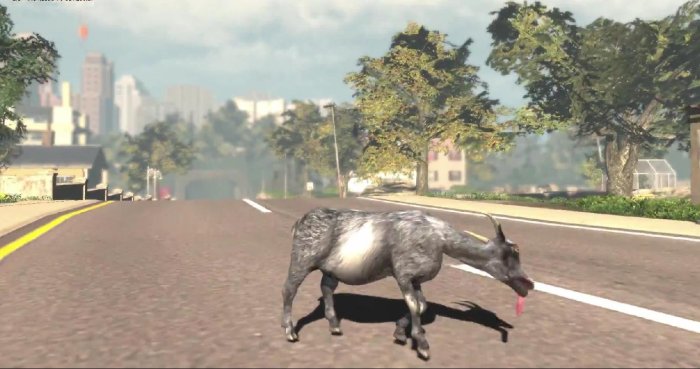 Do you know any huge things that started out as a joke? Well, Goat Simulator appears to be one of them after Coffee Stain Studios decided to turn what was initially an alpha footage hoax into a full game featuring… a silly goat. One that does silly stuff, gets hit by cars and wrecks things around. Just like that.

Initially, the Goat Simulator was presented via a joke video on YouTube, showing up some otherwise nice mechanics, a good physics engine and the silly goat in action. You can check it out below, it already got over 2 million views on YouTube and it will certainly not stop here:

The strange thing is that people considered this idea so amazing and fun that they demanded a full game to be launched. And since Coffee Stain Studios won’t say no to fellow gamers (especially since they did have some sort of a working game created), they decided to actually make Goat Simulator a reality. One in which you will control the silly goat and wreck things around. You can also use an axe glued to your huge goat tongue to… wreck even more things around. Oh, my!

Here’s the updated trailer showing some of the new stuff that the goat has learned:

You can keep an eye on the progress of Goat Simulator by checking out the game’s official website.

How to Enter the Titanfall Beta Now!

Author VgamerzPosted on April 22, 2014October 12, 2019
RPG It’s enough for you to tell me that your game is inspired by the first two Fallout titles, and I’m sold. If you...
Read More

Humble Bundle Weekly Sale Takes You on an Amazing Adventure

Author VgamerzPosted on February 21, 2014October 13, 2019
Adventure If you’re a bit of a more old school gamer like myself, then you probably love point and click adventures. Not the most...
Read More

Author Kevin TashPosted on July 13, 2015January 30, 2017
If I haven’t said it anywhere publicly before, I’ll say it here: Playstation Plus is amazing! Every month I get at least 2 new...
Read More

Guide to Orcs Must Die 2 Achievements

Author VgamerzPosted on August 1, 2012October 13, 2019
Orcs Orcs Must Die 2 has just been released on Steam and has already proven that it’s a very popular sequel of the original...
Read More

Author VgamerzPosted on April 4, 2014October 12, 2019
Jagged One of my favorite games as a kid was Jagged Alliance (well, all the titles in the series) and I always hoped that...
Read More