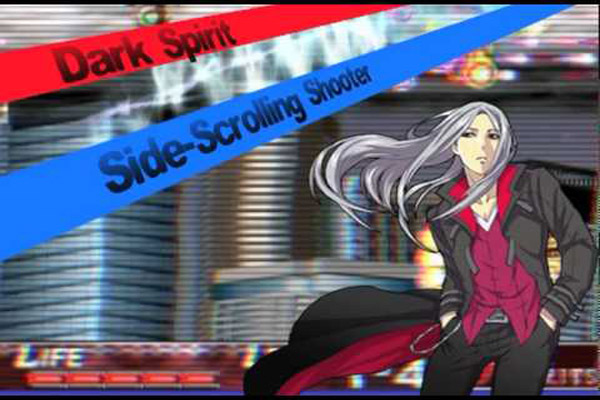 Now, it’s safe to say that Nintendo’s Go Series doesn’t have a vast army of rabid fans (forgive me, lone crazy dude who loves them, but we’re hardly talking Call of Duty’s lofty levels of fame right here). This initiative brought a selection of odd little games to the DSi store, across all genres, at a budget price.

As grandma always said, buy cheap, buy twice. Or, you get what you pay for. Whichever. Grandma was a canny ol’ bird, always passing off these well-known cliches as her own work. There’s not much fun to be had in the home, after all. Anywho, she was wrong, because sometimes a remarkable little gem comes along for a great price.

One such instance would be Dark Spirits. It’s a retrotastic scrolling shooter/Castlevania hybrid. Can you argue with that kind of concept? You cannot.

For all intents and purposes, it’s a standard-issue old style blaster. You cruise from left to right, propelling bullet-flavored steely fury at anything and every-darn-thing that crosses your path. The occasional boss lumbers into view, hoping to rearrange your ship into a tiny, shattered heap of twisted metal, blood and bitter tears. You eradicate them too.

But what Dark Spirits does is deftly add a whole bucketful of creepy demon-ness to proceedings. And a unique power-up system. But mostly the macabre weirdery. 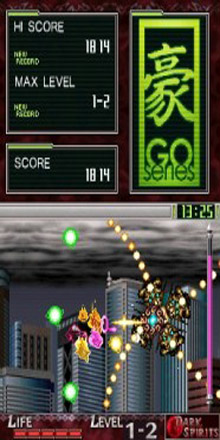 You take the role of an identikit vampire dude. Flow-y black cape, equally flow-y grey hair, you know the score. As he proceeds through the stage, he’s beset by all kinds of freaky flesh-things. These buggers wouldn’t look out of place in Castlevania. To combat them, you engage the number of odd magical orbs that are orbiting your body. Which is where it gets a little complex.

Enemies will drop pick-ups of different colours, which you must ‘catch’ with one of your own orbs. This will give you a certain kind of shot (weaker rapid fire, more powerful but slow shots and so forth), but only affects the orb that collected it. The same type of pick-up again will level up that particular orb, but it’ll reset any different ones it touches and change them to its own type.

It’s a very novel system, and one sure to elicit howls of rage and/or despair when you slip and reset an orb you’d been working on building up for three levels. It happens.

It happens to me, at any rate.

So, sure, Dark Spirits can be a pain. Nevertheless, it struck a real chord with me for its bold, brash and bizarre presentation, its macabre atmosphere, that compulsive-yet-punishing gameplay and the wonderfully electro soundtrack.

The Problem With The Maps of Black Ops 2

Author Christopher BiaginiPosted on December 3, 2012October 13, 2019
Maps Call of Duty: Black Ops 2’s multiplayer modes have further built upon the foundation that has been set in previous games and tried...
Read More

Craziest Things to Ever (Intentionally) Come Out of Twitch.tv

Author Nick ConnorPosted on September 30, 2015January 30, 2017
Twitch.tv has been a fascinating new form of entertainment.  The idea that watching people playing video games, and not even just the highest level...
Read More

The VGamerZ Monster Files: Specter and the Monkeys (Ape Escape)