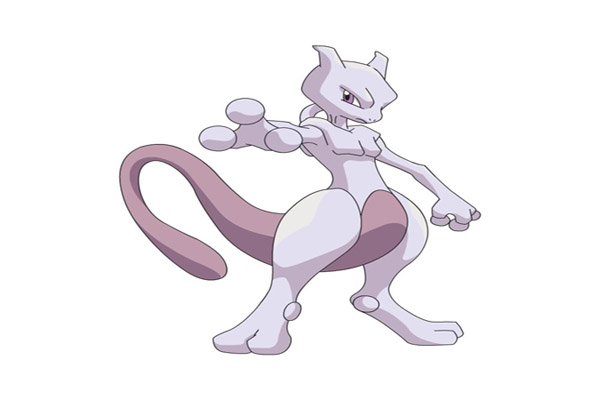 GAH! Hold on to your underpants and lock grandma in the closet (for her own protection, naturally), it’s Mewtwo!

Anybody who vainly endeavored to catch this bugger back in 1998 knows what a fiend Mewtwo is. Your buddy Brian lied and told you that hammering the Up and A buttons helped, but it didn’t. It didn’t. What the hell, Brian? It was a long ol’ slog to catch this thing, which cemented its position as the ultimate Pokémon.

This mutated monstrosity was the result of –once again– scientists playing around with things that should really be left darn well alone. In this instance, experiments with the DNA of Mew. Now, ‘horrific gene splicing’ isn’t a phrase you’ll find in many of Nintendo’s family friendly games, so you know the brown stuff has hit the fan right here.

The result was a terrifying, remorseless feline death machine of deathly death. With death on.

In the original Red and Blue games, it could be encountered only after defeating the Elite Four. This would allow you access to the cave it resides in, where you’d have quite the fight on your hands. This guy had Master Ball written all over it, what with its high level and steadfast insistence on breaking out of every other darn kind. That Recover spam was probably the first thing in video games I ever raged at.

Back then, the Psychic type was king, and Mewtwo was its… king. (I didn’t think that sentence all the way through.) Still among the most fearsome special attackers in the game, Mewtwo remains among the ‘Uber’ pokemon banned from standard play. It certainly isn’t moving any time soon.

With the release of X and Y, this beastly beast was given two Mega forms. Only Charizard shares that honour, which says a lot about the villain’s popularity. As does the clamour for Number 150 to return to Smash Bros. Now there’s an added element of mystery about this titan, as it may also morph into a physical attacker (Mega Mewtwo Y) and beat on you from a whole different angle. Just to add to the fun.

The Issue with DLC

Retro Corner: The Best Jurassic Park Game There Ever Was

Author Chris LittlechildPosted on June 14, 2014October 11, 2019
QuickPick There are some genres perfectly suited for the touchtastic talents of the DS. When it’s implemented properly, and not just shoehorned in for...
Read More

Author VgamerzPosted on March 28, 2016January 9, 2017
Blizzard is just about to launch their latest game to the world and most likely everybody will want to play it. And even though...
Read More

Author Chris LittlechildPosted on March 14, 2014October 12, 2019
Wii If you’ve been following this much ballyhooed brawler, you’ll know that it’s all getting a little mad around here. We haven’t been allowed...
Read More