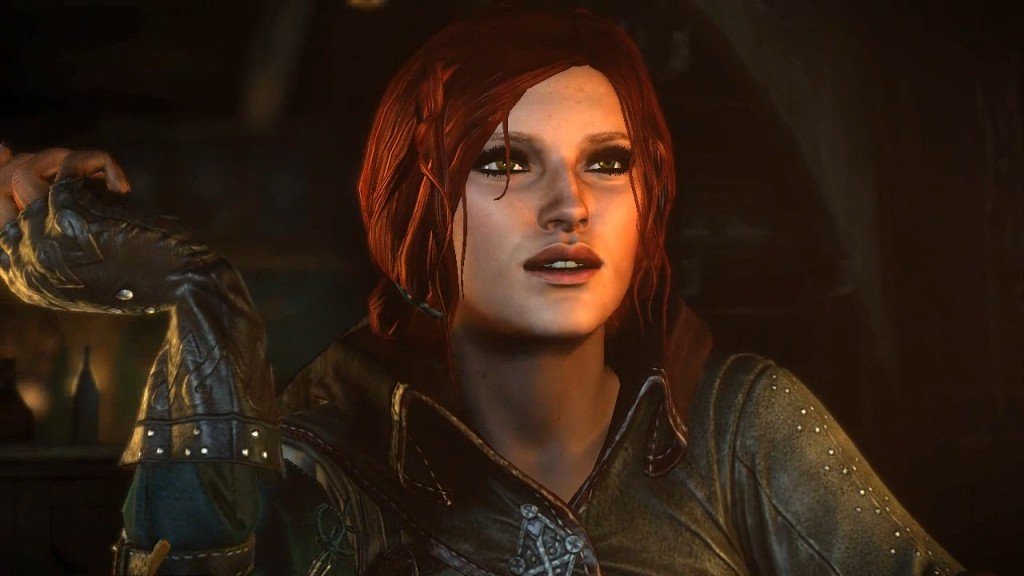 Triss Merigold of Maribor is a sorceress and the main protagonist Geralt of Rivia’s close friend, and lover in The Witcher games. She is also a close friend to Geralt’s main lover through the books, Yennefer of Vengerberg. Triss is in love with Geralt and is very jealous of the relationship which Geralt has with Yennefer, even though the bond they share is very complicated.  Triss took it upon herself to act as a motherly/sisterly figure to Ciri during her time at Kaer Morhen (the witcher stronghold), where she looked after her and helped the others there to treat her as a growing woman, as opposed to a witcher-to-be, because of this Ciri wasn’t subjected to any mutations.

At the beginning of the books it was thought that Triss had died at The Battle of Sodden Hill, where it was thought that fourteen of the twenty-two mages who had been fighting the Nilfgaardian army had died. Hence this was why she was named as the “Fourteenth of the Hill”.

During Blood of Elves, Triss falls ill and Geralt and Ciri help  nurse Triss back to full recovery, but even though Triss is a sorceress she is allergic to magic and therefore she couldn’t administer any of her magical potions to make herself better and had to rely on more conventional means of medicine. Although she is not allergic to magical amulets.

After the Thanedd Coup, which occurred when mages employed by Nilfgaard had planned a surprise attack on the northern mages while at a planned reunion on Thanedd Island, the Brotherhood of Sorcerers disbanded and six weeks later the Lodge of Sorceresses was formed by the mage Philippa Eilhart and Triss Merigold was a founding member. She was also on King Foltest’s royal council.

Triss will be in the upcoming witcher game  – The Witcher 3: Wild Hunt.

Triss in The Witcher (Game Spoilers)

Geralt of Rivia is first found in the woods near Kaer Morhen after being thought dead, and Triss is one of the first people who he meets, even though he has no past recollection of her or anyone else due to his amnesia. The Salamandra (a criminal organisation throughout the first game led by Azar Javed) then attack Kaer Morhen and Triss helps fend them off, albeit unsuccessfully as they steal the witchers secrets to their mutagenic substances and Triss is left seriously wounded. Geralt then makes Triss a special potion to help her fully recover, even though in the books Triss is allergic to magic potions and can only use magic amulets to recover herself.

After a battle with the Salamandra leader Azar Javed in the swamp later in the game Triss nurses Geralt back to full health at her home in the city.

Later on during the game Geralt has the option to choose Triss to look after Alvin or whether  to have Shani look after him. If Geralt let’s Shani take care of Alvin then Triss decides that he doesn’t trust her and is very angry at him. However if Geralt allows Alvin to stay with Triss then she takes this as a sign of trust and it only deepens their relationship. Triss hopes that when Geralt finishes dealing with the Salamandra that they can raise Alvin together and have a relationship together.

At the closing stages of the game, Geralt goes to kill Jacques de Aldersberg (the Grand Master of the Order of the Flaming Rose) and Triss offers to help, but she is fooled  by Geralt into leaving while he goes to kill Jacques. When Geralt appears in the visionary ice plains a vision of Triss appears and she helps Geralt go after him.

Triss in The Witcher 2: Assassins of Kings (Game Spoilers)

Triss begins the game as Geralt’s lover, and the two are in a relationship and have plans to leave King Foltest’s court once the situation with the La Valette’s is dealt with. However, with the death of King Foltest their plans were scuppered as Geralt was framed for his murder.

In the first chapter Triss can be found in Flotsam staying with the Blue Stripes, a Termerian special forces unit lead by Vernon Roach. Her relationship with Geralt deepens during their time in Flotsam and the two of them spend some time alone in the elven bath’s, where Triss says “I forgot all about Flotsam, the Scoia’tael, the kingslayer, the whole world really…”.

At the end of the first chapter, Triss is kidnapped by the real kingslayer Letho, where he forced her to teleport both of them to Aedirn. She isn’t seen for the rest of the game until she is rescued.

Why I Love Killer Instinct (Despite Never Playing It)

Predicting the Features and Release Date of Kingdom Hearts III

Author Kevin TashPosted on July 21, 2015January 30, 2017
WARNING! This article contains possible spoilers of the Kingdom Hearts series! You’ve been warned! And the day has finally come where I finish my...
Read More

Author Simon O'NeillPosted on November 13, 2016October 13, 2019
Geoff Geoff Keighley, the man behind The Game Awards and many other ventures, has recently come back into the spotlight with a surprisingly great...
Read More

Dying Light: 5 Reasons Why You Should Play This Game

Author Marta BrancoPosted on January 27, 2015October 10, 2019
Dying Light Action survival Dying Light is coming out today but the hype seems to be long-gone. Surprisingly, and despite all the won awards,...
Read More

Author Kevin TashPosted on October 21, 2015January 30, 2017
All signs are starting to point to 2016 being the year the NX comes out. This is a really exciting time for Nintendo fans...
Read More