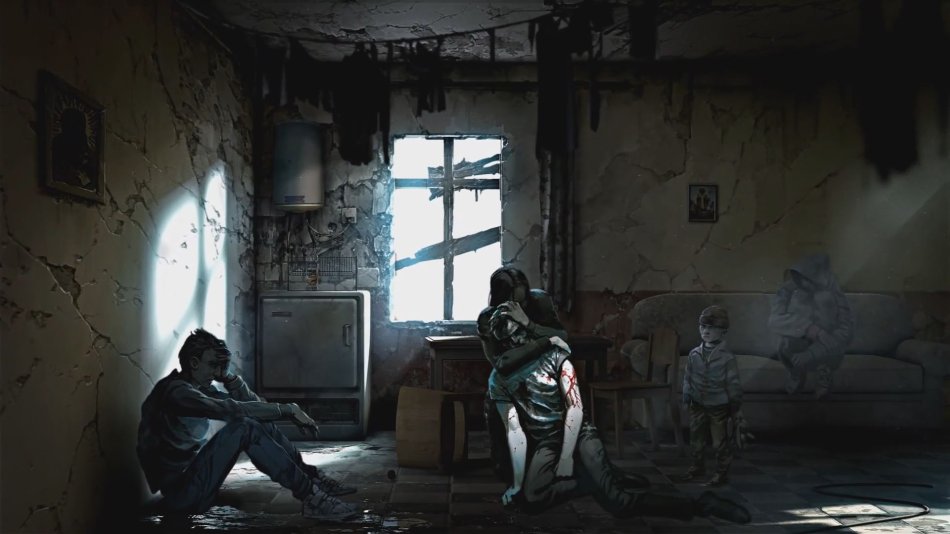 We’ve talked a bit about the amazing This War of Mine recently in our review and I think it’s pretty much clear for everyone that I really, really love this game. One of the things that makes me enjoy it more than the regular crap that we get nowadays is its increased level of difficulty. This game is brutal on some occasions and apparently impossible on others, but this doesn’t mean that you can’t beat it – on the contrary, and the more you fail, the better you will feel in the end when you finally succeed.

Although the game is just as much about luck as it is about skill, we can still try to improve our chances of winning – and we’re here to help you do so with some This War of Mine tips and tricks: some advice that will hopefully have all it needs to become the ultimate strategy guide for players out there. And we’ll have everything from basic tips to more advanced tips on how to survive the winter and win the game. So… prepare to do some reading!

1. Explore the house ASAP
Every time you start a new game, you will get new characters and new loot, including the house. You should explore the house as soon as possible to get all the stuff in there and start building ASAP. Also, since almost always you will have at least one character who is sick, you need to do this to get medicine or bandages or something to get them feel better.

NOTE: Some players suggest that a better strategy with the house is that of not looting it at all until you are first raided to minimize the loss of resources. This makes some sense, but I haven’t tried it personally and I still prefer to start by completely cleaning out the house and use the resources to build things that can’t be stolen (like beds or oven).

2. Feed your survivors every other day
The biggest problem I have with This War of Mine is related to food: that’s pretty scarce and you need to micromanage it flawlessly to make it last. I would strongly suggest keeping as much food as possible at all times and even if you have a surplus, only feed your survivors every other day. They won’t be the happiest around, but it will work!

3. Guard duty at night, sleep during the day
I rarely – if ever – have any of my survivors sleep during the night. Two are on guard duty, while one is scavenging. This increases your defenses if you are raided and reduces the amount of stuff you lose. As soon as the new day begins, send at least two people to sleep, while the third is crafting valuable stuff. Switch them as soon as one’s up and you’ll keep all your survivors well rested and house well defended!

4. Home & Character tips
There are some minor things to have in mind when playing the game: if your characters have no vices (like coffee or cigarettes), you can easily trade those as soon as you get them. You can also double click an area on the screen to have your character run, and when in the house it would make most sense to build only on one or two levels, so that your survivors don’t have to cover a whole lot of distance when working in the house. I still haven’t managed to find out if it is better to build at the bottom or top or if it matters at all – it probably doesn’t right now, but in the future things that are hard to reach should be easier to protect, I guess.

5. How to properly scavenge
Always send the person with the most space in its backpack. If all equal and you have them, send a soldier or the best runner. It’s important to leave the area before 5AM, otherwise your survivor will get home later and there’s a chance of him being injured or even killed. So for large areas, Run for Exit at 3 AM to be safe, and for small areas, start running at 4 AM.

Food is the most important thing to get when scavenging, but always keep your inventory full and change things around as you play, replacing easy to get stuff with the rarest things. After food, bring back components, wood and medicine because these are extremely important as well.

Go for the safest areas first and try to scavenge them dry. Some have hidden items, so make sure that you investigate everything (when an eye symbol appears). Also, check out the details regarding the area you’re about to visit on the main screen – if there’s no food there, there’s rarely a point to visit.

Have in mind that the areas that you visit can be scavenged by others too, so that’s why it’s best to go for the easiest, undefended areas first, then work your way up.

Prepare to kill. It’s a tough world out there and you will eventually have to do it. The best way to do this is by being stealthy, but it all depends on the weapons that you have, the time that’s left and how the other characters are moving around. However, it’s usually the easiest way to get the resources that you need and save your life. It’s also better if you have Roman as the scavenger since he won’t become so sad after sending people to another world – but only use him to wipe out everything, then send somebody with a bigger backpack to do the cleaning. Don’t forget that others scavenge areas, though, so hurry up!

Remember the equipment that you need – when scavenging, you might not have access to some areas if you lack a lockpick or saw, or it might be a lot easier to advance if you have a shovel. I never got to an area where I couldn’t bring anything back home because I was blocked, so always do the recon first, take whatever you can and return with the proper equipment to clear out the areas!

5. Fighting tips
Fighting is extremely difficult in This War of Mine and best to be avoided. However, it can’t always be the case and the best areas in the game are the dangerous ones, so you have to be ready to fight. Fortunately, the easiest weapons to get – melee weapons – are extremely useful and lethal if used correctly. Learn to sneak behind a character for a quiet kill (select the knife and when it turns yellow, go for it!) or stay hidden, waiting for the character to pass you before slicing their throats.

Different strategies can be used here, but there’s no perfect one. What works best for me is drawing people to a hiding spot (make some noise by running around and hide – enemies will come to investigate, won’t see you and you can take them out). However, if you are outnumbered – and you will usually be, it’s better to be patient and have a safer strategy.

In the end, don’t worry too much about getting injured if you can finish the job. Your survivor will need to spend a few days in bed and use bandages to fully recover, but you will also get a lot of goodies from the heavily defended areas. So jump straight into battle during the first few games to know how it works and once you do, start a new game and work your magic!

6. The trading glitch
If you have Katia as a character, you can use a really interesting glitch (that will eventually get fixed): Go to the Military Outpost with 6 Moonshine and 20 Rolled-up Cigarettes and trade 3 Moonshine and all the cigarettes for anything you want. Then, you can start trading 3 Moonshine for 3 Moonshine and 4 Roll-up Cigarettes, meaning that in a few trades you’ll be able for another great trade. Make sure that you take advantage of this while it’s still possible!

For now, these would be our tips and tricks for This War of Mine players out there. If you have other gameplay suggestions and strategies to add, feel free to comment below and share them with us!

How to Get More Supply Drops in CoD Advanced Warfare

Author VgamerzPosted on November 6, 2014October 10, 2019
Supply Drops Now that we’ve managed to fix all those Call of Duty Advanced Warfare crashes and problems, we are ready to fully experience...
Read More

Enter the Gungeon Boss Guide: How to Beat Bullet King

Author VgamerzPosted on April 7, 2016December 7, 2019
Gungeon Boss Guide In my opinion, Bullet King is one of the most difficult bosses that you can encounter at Level 1 (Chapter 1)...
Read More

Fallout 4 Settlements Guide: How to Build the Perfect Settlement in the Game

Author VgamerzPosted on November 11, 2015January 30, 2017
Fallout 4 brings a new mechanic into play: we can build real settlements in the game and be an active part of rebuilding the...
Read More

Author Marta BrancoPosted on January 28, 2015October 10, 2019
Dying Light Dying Light is now available worldwide but an extensive list of performance bugs and errors are affecting the playability of this survival...
Read More

Author KirstenPosted on March 19, 2016January 9, 2017
This is one of the leveling spots I found in Final Fantasy Type-0 and can be used even when you’re AFK. It’s not super...
Read More