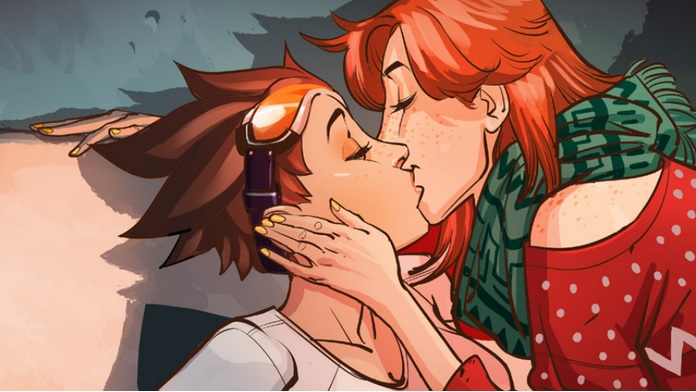 Tracer’s Out the Closet

It’s been a few weeks since the news of Tracer’s sexual orientation went live. If you missed it, you can read it in Blizzard’s comic “Reflections” on their website. The story is a really cute look into the life of the Overwatch mascot and her journey to buy her girlfriend a scarf. They share a simple and chaste smooch near the end then set the internet on fire. Tracer’s sexual orientation isn’t the first controversial step in improving diversity in the gaming industry. But now that the dust has settled I wanted to explore why this is a great thing for the future.

Sound the Alarm For Diversity

Full disclosure, I am an African American woman. I am a part of one of the populations that does not get as much screen time in games. It’s no secret that games have been staring and tailored to inherently heterosexual white males. It is something most gamers know but in recent years the calls for diversity have increased. And players didn’t just want any old diversity, they want meaningful diversity.

Have their been a few games with female protagonists? Sure. However, if she was not eye candy ala Tomb Raider’s Lara Croft then she may not have made it to the forefront. Have there been black protagonists for games? Sure. They are mainly male but if he was not a criminal, like AJ from GTA San Andres, then they didn’t make it to the forefront either. Have their been characters that aren’t heterosexual in games? Absolutely. But unless they were comical or made to satisfy the wet dreams of men like Fear Effect they weren’t discussed much either.

In research published in The Journal of Experimental Child Psychology showed that African American children form negative perceptions of themselves based on how they are portrayed in different media. That media includes books, television shows as well as video games. Another study cited on CNN discussed how television images of powerful, positive and strong white men can raise the self esteem of white boys but have a negative impact on girls of all races and African American boys.

There has been a lot of conversation about how things are “better” for diversity overall. While I agree that positive strides have been made, the journey is far from complete. If I can still peruse the comments section about Tracer being gay and read the dismissive attitudes of some of the community we have more to do. Change doesn’t happen overnight and until there is inclusion for many types of stories then the conversation will continue.

I wasn’t kidding when I said the climate was getting better. Despite Tracer’s sexual status, she is still the mascot for OverWatch one of the biggest selling games of the year. This year we have Mafia 3 staring a black protagonist and tackling the issue of Racism in the 1960’s south with no remorse. We also had Watch Dogs 2 staring another black protagonist as a computer hacker wearing hipster clothes versus white tees and jeans.

We have had more inclusion for different types of sexual relationships over the years as well. In the Mass Effect series players can romance men as well as women. That is even the case in the surprise hit Stardew Valley. In the MMORPG Final Fantasy 14, players can also marry any player of either sex if they so choose without jumping through hoops.

The moral of the story is, Tracer’s reveal is continuing to push the conversation of diversity forward. For those persons who it does not effect none of this should matter at all. For those of us who do care, it helps us to continue to enjoy the games we have always loved even more. To be honest, saying that Tracer is gay in a comic that is not included in the actual game can still give players the chance to ignore that aspect of her identity. I can accept that for now as we “baby step” these changes into the normal game conversation. The climate for diversity is changing and it will be better for us all.

What do you think about Tracer’s sexual orientation reveal or diversity overall? Let us know in the comments below.

Note: Feature Image retrieved via Polygon. Tracer and Overwatch is owned by Blizzard.

Xbox One Exclusive Scalebound Has Been Cancelled

Author Nick ConnorPosted on March 15, 2015October 9, 2019
Tembo The newest game being developed by Pokemon developer Game Freak is certainly a strange one and not just because it stars an elephant...
Read More

Author VgamerzPosted on July 30, 2012October 13, 2019
Battle It seems that today is “leak day” when it comes to details about the upcoming Playstation All-Stars Battle Royale video game: we now...
Read More

Author VgamerzPosted on January 21, 2016January 9, 2017
I’ve been doing some research online about the best weapon / blaster to use in Star Wars Battlefront and the problem with most articles...
Read More

Games with Gold for September 2015

Author Daniel PricePosted on August 25, 2015January 30, 2017
The lineup for next month’s Game with Gold programme has been revealed. September will give gamers four free games in total: two for Xbox...
Read More