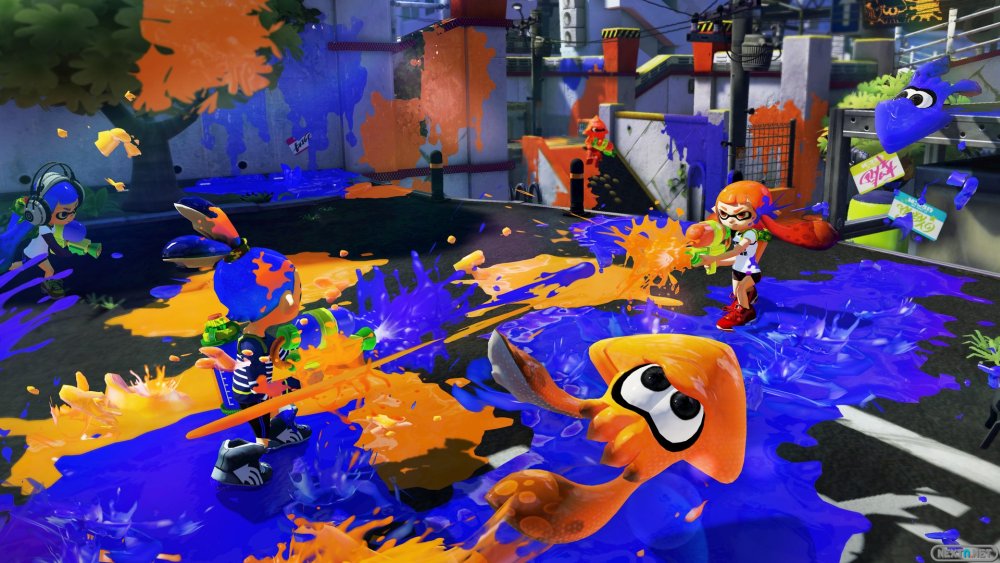 I’ve owned Team Fortress 2 since 2008. It was the very first PC game I ever bought and was recommended to me by one of my best friends. It also happens to be the game that introduced me to every other mod brought to life by Valve who have continued to update the game since 2007. As you can imagine, not only is the game absolutely bursting with content and replayability, it also holds a pretty sentimental place in my mind.

Now, I’ve strayed many times from Team Fortrees 2, but I’ve always managed to come back. I’ve put well over 800 hours into the game, which is nothing compared to the thousands of hours other players have invested into the game. But it wasn’t until I got my hands on Splatoon that I ever felt myself having the same type of fun I do playing TF2.

Part of this feeling stems from how accessible and casual the game feels. Each match is limited to three minutes each and it really seems like it’s the perfect amount of time because you never get the chance to wonder what to do next before the game is over and the winner is decided. Maps are also on a four hour rotation which means every four hours you get a pair of maps to play on for regular queues and a separate pair for ranked queues. This might seems a bit backwards, but it really aids in helping players learn maps quickly. By the time I get bored with one set a new one is usually right around the corner.

The length of matches are in pretty stark contrast with Team Fortrees 2 but the casual atmosphere of the games feel the same. In TF2 I enjoy playing payload maps that consist of 16 on 16, which means that while I do have the ability to try and carry a team with the help of a medic, I can also blend into the background and just let things happen.

Splatoon has this very same feeling. You only win the match by covering more of the level with your ink than the opposing team. No one can really carry the team here since four players spouting ink will always be better than one, so you end up losing the sense that you’re the most important player on the team and I actually find myself more relaxed. I sit back, do my job, and have a ton of fun doing it.

Carrots on a stick

The constant stream of progression and new content is another part of the game that keeps drawing me back in. Nintendo launched the game with a handful of maps unlocked and enough weapons to not be boring, but there’s actually a lot more content on the disk. What they’re doing is rolling out maps and other content in an escalated manner so that there always seems to be something new to look forward to.

The leveling system adds to the progression since you unlock weapons and new gear as you level. Leveling is quick in the beginning but begins to slow down once you get around to level 10. A lot of time grinding out XP is filled by trying out all of the weapons you get that completely change the way your character plays and this can be further compounded by adapting your stats to your play style by equipping additional gear.

There are no classes in the game, and gameplay doesn’t feel anywhere near as varied as TF2, but the objective and weapons do make that game feel more interesting than Call of Duty or Battlefield. Covering the map should be a player’s primary goal but there are unstated roles that help contribute to this goal in different ways. I personally enjoy hanging back with a roller and playing defense. In the beginning of the match I stay behind so my team can go push up and set the frontline to our advantage. Once I have everything painted I creep around and defend our turf so no aggressive players can snag some for their team.

On the opposite end, sometimes I’ll grab a Splattershot so I can go on the offensive. This role revolves around pushing your turf up and forcing their team to play more defensively which doesn’t give them the chance to grab any of your turf to have as their own.

Splatoon isn’t without its flaws, but they’re minor ones I can look past. The shooting genre has been primarily dominated by military shooters for years now and it’s incredibly refreshing to see Nintendo (of all companies) push forward with a new IP that adds an innovating experience to the genre.

Gear Up Because Battleborn is Going to Blow You Away