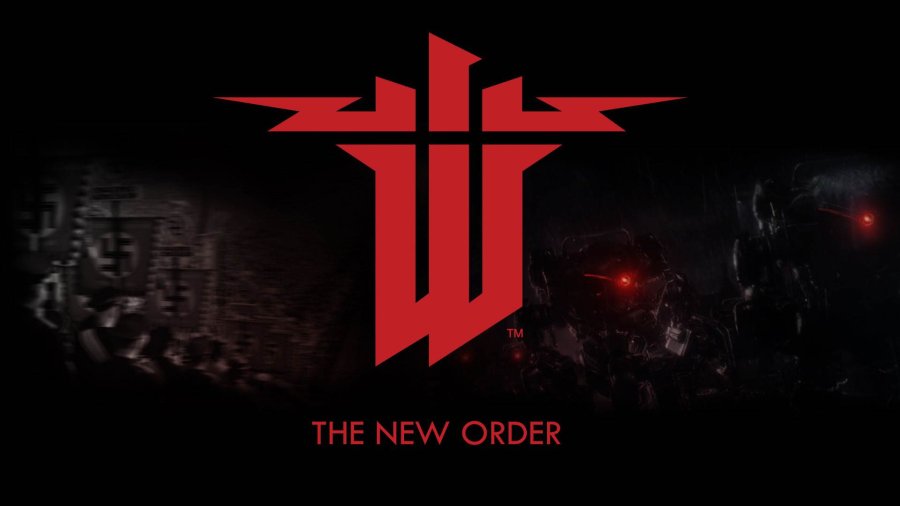 Author’s Note: This ‘wrap-up’ assumes basic knowledge of Wolfenstein: The New Order. An uninformed reader may still enjoy the piece, but you have been forewarned that characters names WILL be used without backstory and the second to second gameplay WILL NOT be explained. There are spoilers for the game’s ending in one paragraph toward the bottom, with  tags for where they begin and end. Enjoy!

Since Wolfenstein released a couple of weeks ago talk about the stellar FPS has died down. I thought it was amazing, with satisfying gameplay and intelligent storytelling. The game deserves to be talked about, but instead of doing a review I thought I might try something different. Wrap-Ups will be a type of review, but instead of giving a score I will discuss some of the best and worst areas of a game. Hopefully the overall tone will clue you in as to how I felt about the game, it’s story and gameplay. These ‘finer points’ may seem like excessive critique of a video game, but if we as gamers don’t critique our favorite games and properties we can’t expect them to get any better, individually or as a whole. Hopefully some of these points come across as clear and thought provoking, but you be the judge.

Wolfenstein begins like any other shooter, and that’s good. There has been a general discontent regarding the beginning of Wolfenstein for being uninteresting, a cookie cutter FPS. I saw that as exactly the case. The opening scenes are ripped straight from every shooter since Modern Warfare 1, replete with ‘water-cooler’ moments and ‘brotastic’ cutscenes. At first I was bummed out by it as well, but then the game slowly began teaching me it’s language. As I played, it taught me that the game had a stealth mechanic (one that was actually quite good, but I’ll cover that more later), and that the world was filled with collectibles and pickups and helmets. It allowed me to wade into it’s world, capture it’s tone and take my time. After playing through the complex narratives and systems, I found the beginning well suited for setting up the game’s villain. Veteran FPS players could reach General Deathshead easily, while newcomers would have faced a climb to reach the game’s antagonist. Either way, when Deathshead either removes all sense of your power or makes all the work you have done seem inconsequential, it stings. Not to mention he forces you to make a decision you are absolutely unprepared to make. While the setup may be droll and indistinguishable from modern FPS sensibilities, it sets players up for what really makes Wolfenstein great in an effective manner. When compared to other introductory sections in the FPS space, the opening hours of The New Order put tutorial laden shooters to shame, and while it may not be a selling point, I certainly appreciated it.

After the opening mission, Captain Blazkowicz is put out of action for 14 years. The passage of time is handled better than many games and even a few movies manage to. The Captain is put in a wheel chair and placed by a window, and from there his surroundings speed up and slow down depicting moments of clarity and confusion. It abruptly stops the day Nazi’s come and destroy the hospital/ward. The family who cared for Blazkowicz are murdered, with only the daughter taken captive. As the Captain struggles upward and regains his faculties, the game never blinks as to how much time has passed. Players are kept in the dark until the ensuing level on how long he sat there. I admire Machine Games’ confidence in keeping players in the dark, unaware of anything except the driving thought to kill Nazis. The lack of timeline information traditionally infers that not much time has passed, so when it is revealed that 14 years have gone by and the Nazis managed to win WWII, it comes as a shock to the player as well as Blazkowicz. The best characters are built when player and character can connect in even the smallest instances, and I felt this was an eloquent way to start shaping the Captain we see for the rest of the game. It’s these subtle things that I may even be putting more thought into than the developer, but I appreciate it nevertheless. 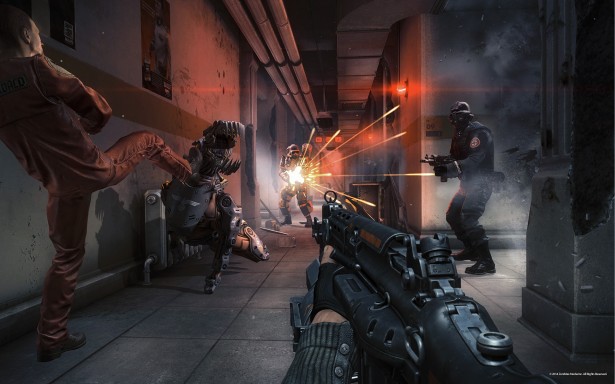 Talking about Captain Blazkowicz brings up one of the downsides I had with the game. The ever present whisper our protagonist speaks in drove me crazy. There were times when he would talk and the voice fit well, but all too often that talk would be dialed back to a dissonant hushed tone. The worst offenders were mid mission as robots, soldiers or fiery explosions were met with whispered comments and observation by the Captain.  While the story didn’t suffer from lower decibel lines, in the moment these struck me as weird and out of place in a game with dual wielding shotguns.

The combat itself held many surprise I wasn’t expecting from the newest Wolfenstein. In retrospect, I think Wolfenstein managed to do what Dishonored set out to do better. Dishonored promised a city that reacted to players play, but ultimately this led to players who were action-oriented just facing more enemies while being stealthy kept enemy numbers low. Wolfenstein has this same idea but on a more moment to moment basis, as almost each encounter can be dealt with quietly with reduced troop numbers or not. This meant that players who wanted a run-and-gun Wolfenstein of old could have that, but those who were more interested in stealth or story could facilitate that. The shooting when things did get loud felt great. At the start I found the shortness of ammo and other resources restricting, but as Blazkowicz’s arsenal opens up, the shortness of ammo made me more resourceful, trying out different weapons on different enemies. The stealthing mechanics were simplistic and smart. After getting a silenced pistol early on in the game, players could headshot foes from huge distances with only the targeting reticle. Once enough stealth kills are made, Blazkowicz is able to throw knives for an instant kill as well. These silent killing options paired with hidden pathways through almost every combat scenario ensure that players can get the job done quickly and quietly. Both arsenals are important in killing the commanders, enemies which call reinforcements that are found in almost every combat scenario. All the intricacy found in the combat make Wolfenstein earn a status above that of the ‘mindless’ shooter, as it is evident while playing how much thought went into each encounter.

Besides the commanders there are quite a few other opponent types found throughout the game. These ‘other opponents’ are mostly robots, and unfortunately they become a pain to deal with during the latter sections. While the design of every mechanical Nazi looks fantastic, the way they can slaughter you isn’t as great. The speed at which death comes when facing one of these opponents hurts, a fact which doesn’t help how much ammo it takes to kill them. Unloading multiple full magazines is enough to take down the smaller machines, but the larger they get the more force it takes to dispatch them. The change up in combat, which usually consists of mowing down foot soldiers, grinds to a halt when these behemoths enter the room. With one present it provides a nice challenge, but when multiple arrive the difficulty skyrockets. Toward the end of the game players face many such situations, and it becomes a grind after the second or third death.

But besides the combat, the game tells an interesting story almost devoid tropes and typical subject matter. Outside the existence of Nazi’s. the games premise feels fresh. With the war won by Nazis everything is industrialized, and the artists had a lot of fun creating unique spaces to show that in. Acting as the resistance to such a mighty power can be daunting, but the game allows entire sections from the 16 chapter long campaign to be about interacting with other characters and exploring environments instead of fighting back. Building the connection to places is effective, whether it be a concentration camp or a secret hideout, you feel the oppression or comfort each space projects. Specific story moments never pull punches either. Whether sitting down on a train after getting coffee or returning to previous locations I will remember these interactions for a while. The story built characters you wanted to be proud of, feel sad for and fight with. Wolfenstein managed to make me interested in a first person shooter’s story for the first time in years and that’s something special.

The ending was an entirely different beast. It chiefly suffers from the high expectations set by 10 previous hours of outstanding content. As expected, it depicts Blazkowicz confronting Deathshead for a climactic battle, but a few story beats within the fight fell flat. It begins with Deathshead putting the brain of your former friend into a robot and telling it to kill you. After a short fight Blazkowicz defeats the robot and puts an end to his suffering friend, but the scene has no real emotional pull. To begin the only background we had with the character was during that first hour of the game before Deathshead took his brain, so there was really no moment where you could start to like that character. Secondly, the fight is over so quickly that there is never enough time to think about what you’re doing while you’re doing it. Lastly, the entire fight your old friend is begging you to kill him, which may have worked, but it came off as cheesy and cheap. After that, Deathshead himself comes out and you are tasked with taking down his giant mech suit. The fight seems as if it will be a long drawn out battle, but the first stage is done by simply firing tow cannons at some air balloons so lightning will strike the general. After the battle is taken inside, a tense fight occurs while the room is filled with fire, smoke and debris. After the fight is over, the game has a few moments of excitement before it slows down, and players are left wondering why the narrative went from fast paced boss fight to slow introspective moment. The story ends with ambiguity as to Captain Blazkowicz fate, and sloppily puts a bow on an intelligent, well paced main storyline.

Before writing this I had little desire to jump back into the Nazi resistance, but after getting my thoughts down I may just jump back in. Luckily the game provides an interesting reason to, with a slightly altered storyline and all those aforementioned collectibles. Wolfenstein captured my attention every moment I played, and while it may have lost some luster toward the shaky ending, I still came away happy with the experience as a whole. But this is just my feeling on the game, and I want to know what you thought. Be sure to leave responses in the comments below and let us know what you liked and didn’t like from Wolfenstein: The New Order. Also be sure to check back soon for more wrap-ups and all sorts of video game coverage from us here at Vgamerz. 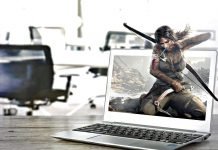