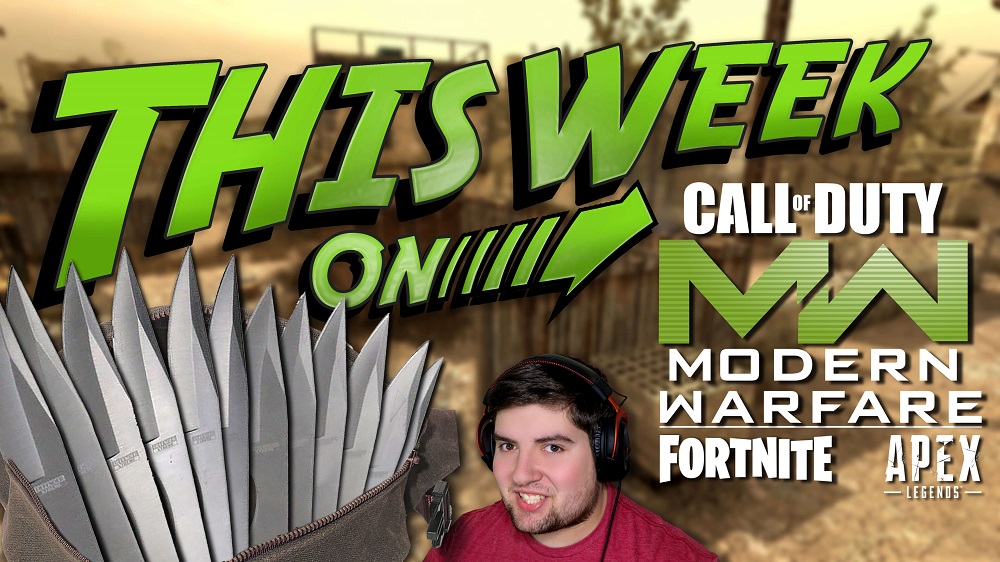 Dear vGamerz.com fans, welcome back to “This Week On”! The YouTube series that brings together the three best epic, funny, and fail clips from gamers around the internet! Whether it makes you laugh-out-loud or face-palm, there’s nothing better than watching a funny meme or amazing gameplay.

This week is all about Accessories! From knives in Modern Warfare to grappling guns in Apex Legends, this week’s clips are all about what tool you use to grab the victory or die trying.

Let’s break down the clips together and vote which one you think is best!

To start off this week, the 90’s are in “da’ haus” because we’re talking fanny packs…and if fanny packs are cool again, consider me Miles Davis. Our first clip is in Modern Warfare, which they should change to “Fashion Warfare” because our player’s fanny is strapped and packed so equatorially he’s like Clark Griswold at Walley World. Our packer-in-chief racks up 11 consecutive knife kills back-to-back. He’s got so many knives packed away, he could play for the Green Bay Packers. Consider him the PACKman Jones of Modern Warfare, however his momentum flames out quickly as he’s finally shot dead — but talk about going out in a blaze of glory.

Next up, our second clip is Fortnight. Our player’s got his opponent cornered behind the bannister of a stately blue Victorian home. He gets in a few shots through the window, when he decides his assault rifle is not enough firepower. Why not bring out the BIG guns? So out of his pack comes an RPG! With a quick reload, he’s confident in his assured victory over his prey when — BOOM — he’s killed by the explosive backlash of an unperturbed teapot lying casually on the table. Safe to say our Victorian window creeper is no longer in the finest of fettle. Time to pack-up and move back to the lobby!

Our third and last clip is in Apex Legends. With loot inbound, our overconfident Pathfinder sends out his grappling hook like Batman escaping into the night. He’s sent flying at Mach 10 in an attempt to beat his teammates to the destination. As he’s careening towards his prize, he linedrives face first into the descending loot drop. SMACK! Game over! Should have thought that one through.

Check out the video and let’s hear your thoughts. New episodes are released every Thursday 11am PST (2pm EST).

About Author: Corbin is a filmmaker and digital content producer committed to positively impacting those around him by helping them actualize their dreams. He has a huge passion for gaming and has been playing a variety of titles for over 25 years. Known as the “Human Swiss-Army-Knife” you’ll often find him working on a variety of projects from social media marketing to documentary filmmaking; Corbin is always looking for new ways to make an idea into reality.

Telling Gamers Not to Preorder: Is It Akin to Victim Blaming?

Author JorinPosted on June 27, 2015October 5, 2019
In the last few days, one of the biggest stories in gaming has been the disastrous tale of the PC launch of Arkham Knight. ...
Read More

Why I Fell In Love With Stardew Valley

Author Andrea TuckPosted on January 17, 2017November 22, 2019
I was one of the people patiently awaiting for Stardew Valley to make it to consoles. Whether it was on my Vita or PS4,...
Read More

Hatred Should Not Have Been Rated Based On Its Trailer

Author Rhiannon NeePosted on February 15, 2015October 10, 2019
Hatred If you spend much time on Youtube, you’re probably familiar with Honest Trailers – a series that creates trailers that actually tell the...
Read More

Why Molyneux’s Enthusiasm Is a Problem

Author Nick ConnorPosted on March 2, 2015October 9, 2019
Molyneux Peter Molyneux, the creator of several famous games such as Dungeon Keeper and Fable, has now mainly become known as the developer that...
Read More