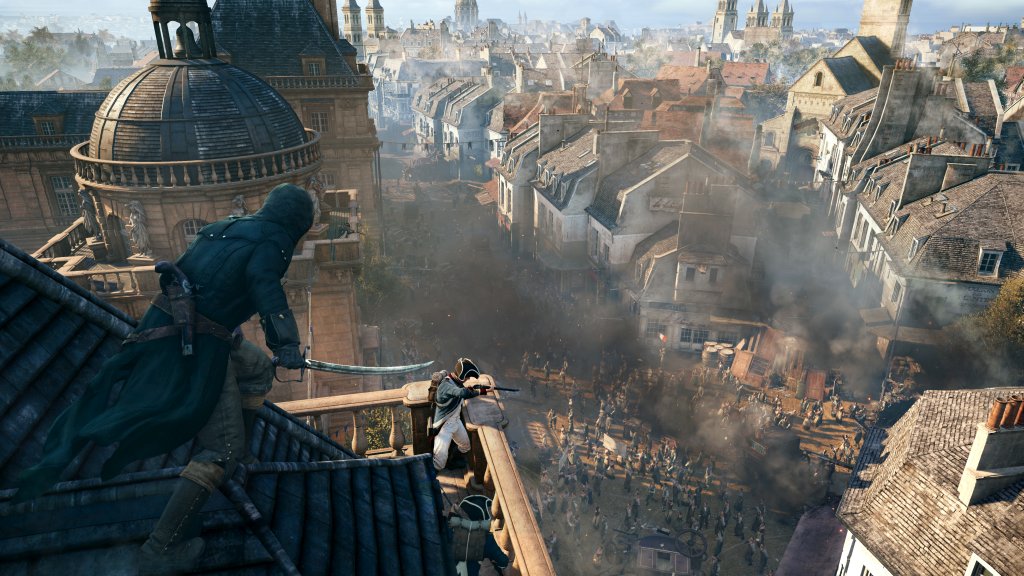 While browsing the internet in a tired stupor, I stumbled upon an article that immediately piqued my interest in all of the wrong ways. Within the piece, there was a quote from Assassin’s Creed writer Darby McDevitt in which he proclaimed that Ubisoft would be working on the Creed series until at least 2025.

Surely this is just a joke, right? After rubbing my eyes and attempting to wake myself from this nightmare, I was both crestfallen and ultimately unsurprised that this was no dream, nor was it optical trickery.

Of course this was real. Of course Darby was telling the truth. It is Ubisoft, it is an age of on-disc DLC, pre-order bonuses, pay-walls, day-one-patches, and unfinished products being sold on shelves without consideration for the consumer.

It is the world we live in. Assassin’s Creed is but one tiny entity in an amoeba of absolute bulls#&t, and I’m sick of it. 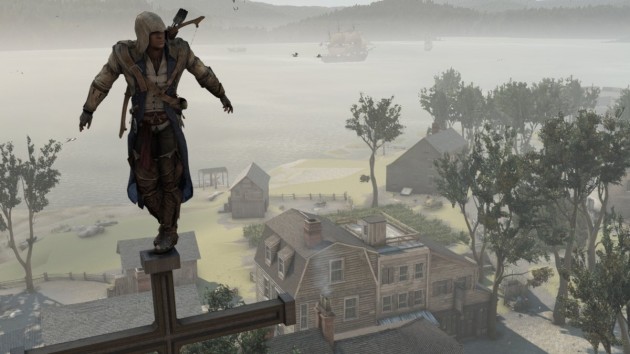 I – Hey you, with the suit… your hubris is showing.

I want to begin by analyzing the quote that started this whole thing.

“We’ve created 500, 600, 700 years worth of history that we hope to start teasing out for the next 10, 20 years or however long we’re around. I particularly love the lore. I’ve been working the past two years, with all the other writers, on getting a great document together on the First Civilization.”

At first it seems harmless. The guy has passion, I’ll give him that. He seems excited about the world they have crafted and having such an immense wealth of material at your disposal would make anyone optimistic.

The problem is that he talks about this as if it will actually last the next one to two decades. He assumes that his project has the means of surviving this long and that the fan base that he is so eager to cater to will remain interested after several years of absolute bollocks.

At this point it must sound like I’m about to start ripping into Darby for his words, so I’ll just state for the record that my anger is not directed towards him. My anger is directed at Ubisoft. When you take into account their track record and the rather arrogant attitudes they’ve had as a public entity, it’s safe to assume that Ubisoft definitely has this plan in mind. Of course they’ll try to suck every last dollar out of the fans to make a profit on this series. It makes sense from a business perspective, but they go way too far every time.

The assumption that Ubisoft can keep Assassin’s Creed as a franchise afloat for two decades is not only a sign of hubris, but a sign of blind greed. We’ve seen what happens to popular franchises like Guitar Hero and Rock Band, and it’s becoming a case of history repeating it self.

Away from the quote, I’d like to focus on the apparent five hundred to seven hundred years of lore that is being established for the franchise. I get that to build a great story, you must have a strong foundation. Tolkien proved this with his stories, and countless other authors and designers alike. it is disheartening however, when the products we receive from Ubisoft are coming packed with almost no story development. As the series has gone on, the main plot has taken such a back seat that it was almost non-existent in recent titles. This is the story that drives you, and it is neglected every single time in some manner so that it can be further extended into fifty more sequels.

This practice is like spreading a small portion of butter over a large piece of bread. It has been spread too thin to have the taste you desire, rendering each bite a tease. I’m tired of being teased and mocked with this ‘modern day’ story that grows increasingly uninteresting and stale as we spend countless hours sailing ships and climbing buildings just to find out that Desmond took a breath!

If you have so much lore and story planned, start using it to build better stories now rather than thinking so far ahead. Your franchise is in dire need of revival, and it might help if you focus more on the present instead of on what you could potentially do in years.This is assuming your shameless company doesn’t go under. 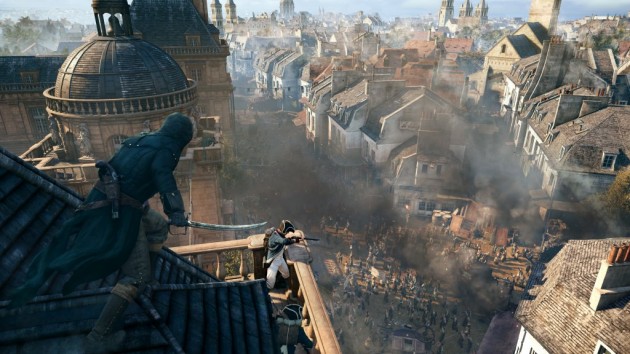 II – Self control is a thing of the past.

We’ve briefly touched on the prospect of popular franchises dying because of arrogant and selfish publishers sucking out every iota of magic that their intellectual property had. I think it is important that we look to the past to mold the future, something Ubisoft is clearly incapable of doing.

With Assassin’s Creed, you had an exciting and fresh – albeit limited – IP with a ton of potential. It was well received and sold well, so a sequel made sense. Assassin’s Creed 2 came out around two years later, armed with a ton of significant improvements over the original game. It was a breathtaking experience, and though it didn’t do much to change the combat or mission structure, it was a hallmark product for Ubisoft.

They started off with a bang, that much is sure. As the titles came out however, it came with increasingly shorter development times, increasingly large and disconnected studios teaming up for development, and a reckless abandonment of much needed polish and evolution in the form of new mechanics and the like, they’ve gone downhill at a rapid rate.

Beyond this, Ubisoft seemingly wanted to make every new game ‘bigger’ than the last. If you read my piece about why less is more, you’ll remember that my stance was this. While ‘more’ is great and fun, more for more’s sake is an awful way to do things.

Each Assassin’s Creed game after 2 that wasn’t simply a direct Ezio sequel, tried to outdo the last game by being bigger. Bigger worlds, expansive landscapes, endless side quests, eventual naval combat. While some of this stuff is excellent, each game comes out more unfinished and broken than the last. Biting off more than you can chew is not a good idea, and it seems Ubisoft doesn’t learn from their mistakes. Having a four hundred thousand gigabyte patch to fix what was possibly one of the worst abominations we call a ‘game launch’ in recent memories, proved this notion. 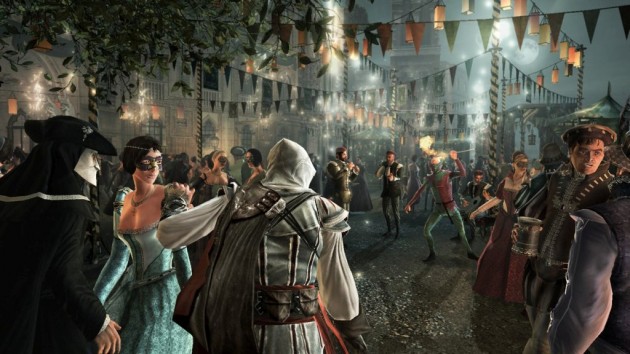 III – Give us what we desire.

If you’ve visited any Ubisoft or Assassin’s Creed message board, group or facebook page, you’ll see that there are always talks about what the fans want to see in the series. Ubisoft did a much appreciated survey that listened to players feedback to help mold the series, and that was a great first step. The second great step they took was that they actually fixed some of the long-standing problems the series had, such as the free running mechanics and mission structure. AC Unity was a good for this, but the game was still bogged down in many many other ways.

We can credit them for listening (a bit) but there are many more problems and requests for the series that go completely ignored. Where is our revamped combat system? Where is our fully finished, stable, bug free product? Where is our asianic setting that everybody and their Grandpa wants?

“Feudal Japan would work as an Assassin’s game, for sure, but I feel like it would start to look like ‘oh, have I played this?’ You know what I mean – ‘oh, I’ve been a ninja before, I’ve been a samurai before.”

That’s where it is according to Alex Hutchinson, creative director for Assassin’s Creed 3. It is entirely bogus if you ask me, and I’ll tell you why.

The fact is this: We do not get these types of games any more beyond a few low budget flops. There is a huge market for them again, but the biggest franchise for playing as an Assassin neglects it, and it’s disheartening. 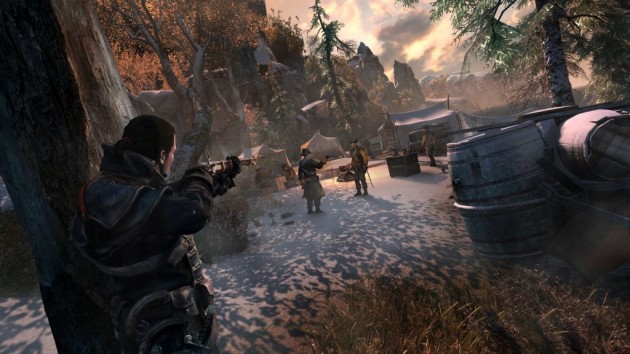 While I could talk all day about how lazy and vapid the Creed series has become, or how Ubisoft absolutely can’t find a single clue amongst their massive stack of cheddar, I’d like to end this with a statement. The fans deserve better.

Ubisoft is a company. Companies exist because of, and survive on, money. Consumers who buy the company’s products are the people that fuel the company to continue doing work. We can’t expect every company to then bow down to the consumer because of this fact, but a little appreciation would go a long way.

Ubisoft has earned a massive fan base that will basically mail them free money in the hopes that a new Assassin’s Creed game will come out. They should be recognising this and trying to make their games all the better for the fan’s sake. Hell, let’s just forget the fans for a second and say that they should do this for their own sake. Build up that reputation again Ubisoft, you sadly need to at this point.

The Next Step for Animal Crossing

Author Matt FordePosted on January 1, 2016January 9, 2017
Describing Animal Crossing can be difficult. What do you do? You dig up fossils, weed the ground, decorate your house, pay off a loan,...
Read More