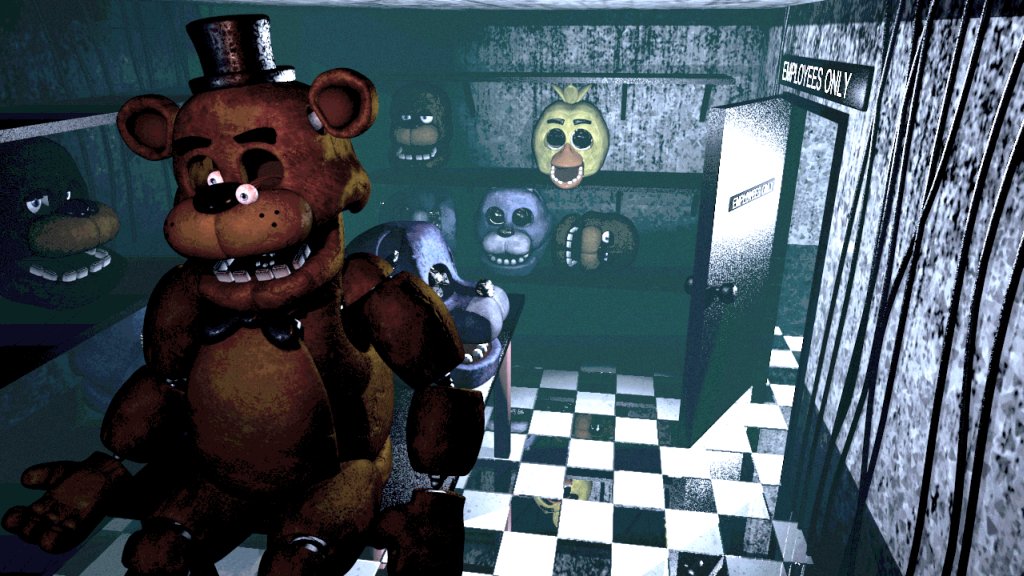 Five Nights At Freddy’s 3 was released last week. If you’ve been following the series, you’ll know developer Scott Cawthorn loves hiding all kinds of hints within the games about the dark past of the Freddy Fazzbear’s Pizza franchise. But who has time to hunt for Easter eggs when you’re flat out just making it through the night alive? Here’s a list of the interesting things you probably missed:

This might be the creepiest sight Cawthorn has thrown our way so far. Occasionally when you boot the game, one of three images of Springtrap will show up. It seems to be pretty rare, and plenty of players may never get to see them. They appear to show Springtrap removing the head of his suit, revealing what you may assume is the endoskeleton head beneath. But, as we know from the minigames, it’s not an endoskeleton in that suit – it’s the purple man. Which means that head under the suit is actually a decaying corpse. Gross.

Between the fact that the place is haunted and you’re having hallucinations, it’s no surprise the scenery all around you keeps on changing. Some of these include a poster of Springtrap randomly appearing on camera 10, a Shadow Bonnie plush that sometimes appears on your desk, the marionette’s mask in camera 8, Iand a paper plate Bonnie appearing on top of the box of junk. On top of that, although it’s hard to make out because of the static, it looks like Bonnie’s hiding on the left side of camera 6.

You may not remember Shadow Bonnie from FNaF 2, probably because you never actually encountered him. Shadow Bonnie appeared very rarely in your office in the second game, and he’s back again in in the third. He’s hiding out in one of the minigames as a clue for what you have to do to reach the good ending. Which leads us to…

There’s actually a LOT to do in the minigames. You probably played through the minigames at the end of each night, but you may not have noticed there’s actually a ton more. They’re all ridiculously difficult to reach because the only hints you’ll have as to how are all hidden in the main minigames. Remember the weird codes that showed up in the hallways, and the shadow bonnie? Those are all clues, and you need to play ALL the minigames to unlock the good ending. Yes, there are multiple endings in this game. Here’s a full guide on getting the good ending.

Yes, Golden Freddy makes an appearance too. He’s just a hallucination, but he might show up in the left corner of your office. He also occasionally appears in the static of your cameras. Fun fact: you can honk Freddy’s nose on the poster in your office.

Mangle’s back – also a hallucination. He might appear on your cameras, and if you don’t notice him at first, you will pretty soon as his presence is always followed by loud static noises. He might also poke his little head over the window to your office. Those noises attract Springtrap to your office, so Mangle, as always, is nothing but trouble.

On the bad ending screen, you’ll notice there’s an extra animatronic’s head in the back that doesn’t belong to any of the original characters. It’s not certain who it is, but it’s a pretty safe bet that it’s Springtrap. Interestingly, this head is absent in the good ending screen.

In the minigames, when you wander to the left you’ll find yourself in the storage room from the original game. You can see a bunch of animatronic parts on the tables, but there’s also what appears to be a human skull. What’s that doing there?

After you beat nightmare mode, a newspaper clip appears showing that the attraction burned down, likely due to faulty wiring. There’s a picture of a Freddy figurine. If you brighten the image, Springtrap appears in the background, indicating he survived the fire. Additionally, the blurred out text on the newspaper is actually Scott Cawthorn telling us about the development of the original game. Here’s what it says:

Looking back on many of my old games, I’ve found that there is almost always a broken-down robot in them. I’m not sure why this seems to be such a recurring theme in my games, but it’s obvious that it’s something haunting me.

Before I began work on FNaF, I had to choose what game to make out of three potential games, knowing it might be my last try before having to start a new career. I was choosing between a sequel to The Desolate Hope, a remake of my first game – Legacy of Flan, or a new idea about animatronics and security cameras.

While working on the first game, I started a crowdfunding campaign for it. I raised exactly zero dollars.

Fun fact: The names Freddy, Bonnie, Chica and Foxy were just nicknames while I worked on the characters. I was planning on giving them official names later but had grown very fond of them by the time the game was done.

In the original game, Freddy was never originally meant to move around the diner and was only meant to “get you” if your time ran out. This was changed before release.

In real life I tend to have waking-nightmares, meaning that I walk in my sleep, etc. One night I dreamt that Bonnie was in the hall outside my door, so I jumped out of bed and rushed to hold the door shut. I discovered that the door was locked and it filled me with dread. In FNaF 1, when the doors don’t work, it means something is already in your office! So when I felt that the door was locked, I felt like bonnie was in my bedroom and was about to get me! Thankfully, I woke up.

I actually modeled the Foxy character on my laptop while riding on a 24hr drive to visit my in-laws over the summer of 2014. It’s very difficult to model a 3D character on a bumpy car ride. Maybe this is why Foxy looks so torn up!

While we were there visiting, my kids got to experience Foxy’s jump-scare for the first time!

Onigiri: Why You Should Avoid Power Leveling Early On

Author KirstenPosted on October 13, 2015January 30, 2017
Power leveling is a staple in any roleplaying game and Onigiri is no different. You can power level and yes, it does make the...
Read More

NBA 2K17 My Career Guide: Tips to Turn My Player into an All Star

Author VgamerzPosted on September 20, 2016October 13, 2019
NBA 2K17 The My Career mode in NBA 2K17 comes with some really nice additions and improvements over the previous years’ games, including the...
Read More

Fallout 4 Guide: How to Romance Piper

Author VgamerzPosted on November 12, 2015January 30, 2017
We have already talked about the best companion in Fallout 4 and Piper’s name was mentioned there because, well… she’s one of the two...
Read More

Author Alessio CalaPosted on February 23, 2015October 9, 2019
Insurgency Insurgency is one of the many online tactical shooters out there but there are a number of features that make it stand out...
Read More

Watch Dogs Guide: How to Make Quick and Easy Money

Author Marta BrancoPosted on May 28, 2014October 12, 2019
Dogs Money doesn’t seem to be a real issue in Watch Dogs, at least for those who choose to be evil and merciless. But...
Read More

Stellaris Guide: How to Win Wars

Author VgamerzPosted on May 18, 2016November 30, 2019
Stellaris Guide Stellaris is that type of game that shows no mercy if you make even the smallest mistake and if you’ve played the...
Read More