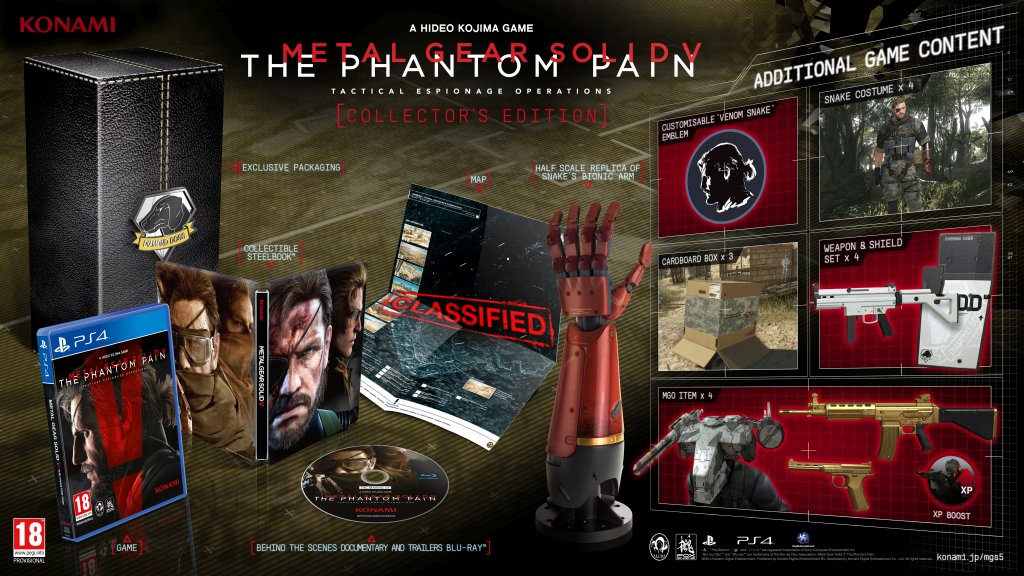 Metal Gear Solid V: The Phantom Pain has finally been given a release date: September 1st 2015. Metal Gear Online will also launch along side the release of the Phantom Pain.

In the latest instalment of the Metal Gear Solid franchise Snake awakes from a nine year long coma, which was a result of the ending of Metal Gear Solid: Ground Zeroes, The Phantom Pain’s prequel. Snake will embark on a personal journey for revenge. The journey will take him to Afghanistan sometime after his escape from the hospital. Snake, the games protagonist, will be voiced by Kiefer Sutherland.

The Phantom Pain is touted to be Hideo Kojima’s last Metal Gear game, and will also act as a prequel to Metal Gear, the series’ first game.

Inside the collectors edition you’ll also receive bonus in game content. These are:

There will also be a cheaper Day One edition of The Phantom Pain. The bonus content will include:

This is truly fantastic news that one of the gaming industry’s biggest known franchises will be releasing one of the most highly anticipated games to come out for the past few years later on in the year, the only shame is that we’ve still got to wait six months before we can play The Phantom Pain. Mark it on your calendars, September 1st cannot come any sooner.

The Witcher 3: Wild Hunt - What Is The Wild Hunt?

Five Nights at Freddy's and Difficulty in Horror Games

Author VgamerzPosted on March 10, 2020March 20, 2020
When it released last September, Mario Kart Tour quickly became one of the best mobile games on the market. It was everything fans loved...
Read More