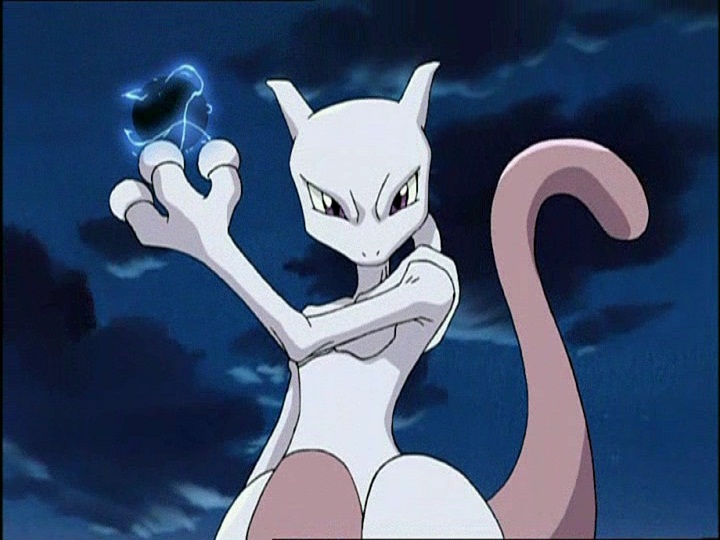 Yep, Mewtwo. Back in Pokémon Red and Blue, this guy was something to be feared. The ultimate pokémon, a creature born from horrific experimentation and the splicing of Mew’s DNA. It was a being of unparalleled power, ability and rip-your-scalp-off-and-wear-it-as-a-daring-fashion-accessory fury.

This formidable feline foe was the last challenge for any trainer, accessible only after defeating the Elite 4 and becoming Pokémon Champion. It was, back in 1998, an unholy pain in the ass to catch. The Psychic type, you might remember, was pretty well untouchable back then as it was, and Mewtwo was the best of the best.

With all of this in mind, you’d probably have to pity any opponent meeting it in Smash Bros combat. You’d expect them all to be trampled hideously, send home in a blood-leaking matchbox like the victims of a Mortal Kombat fatality.

You’d think this unless you’d actually played as Mewtwo in Super Smash Bros. Melee, that is. Because he sucked.

You can see where they were going with making the character, I’ll concede. The Genetic Pokémon is a being of intense mental power; physical strength isn’t its forté. This is usually the case with Psychic types, but it didn’t seem to translate into Smash Bros. very well. As a Smasher, Mewtwo is unfortunately floaty, light and tall. This is a really awkward combination of traits, allowing it to be comboed and such easily. 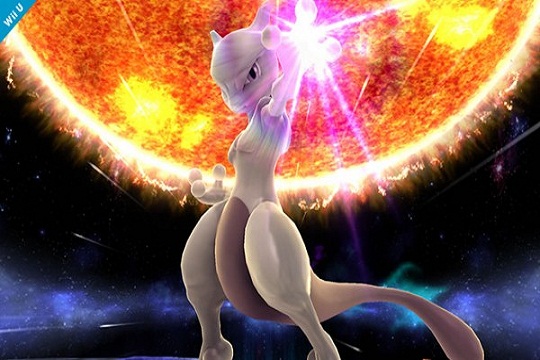 The character was all-round underwhelming. His special attacks, while completely unique among the cast, were a little questionable too. Mewtwo’s selling points were his powerful throws and great recovery, and not much seems to have changed in its transition to Smash Bros. Wii U/3DS.

Naturally, we can’t tell much from the scant days the character has been available. How it’ll match up with the rest of the Smashers, viability and such are going to take time to explore. We do know, though, that Mewtwo’s specials remain unchanged.

Shadow Ball is a simple, very powerful charged projectile, a la Samus’s Charge Shot. Teleport deals no damage, but adds to the character’s long-ranged and unpredictable recovery and movement. Disable has little range, but its ‘stunning’ effect is brilliant for follow ups, a property it didn’t quite have last time around. Finally, there’s Confusion, which will put opponents to sleep like a safer version of Jigglypuff’s sing. It’s perfect for delivering the coup de grace.

Mewtwo’s repertoire of smash and aerial attacks have been tweaked a little, offering both stronger and slower moves and faster ones. Up smash and forward air are particularly interesting new tools.

This guy is a real fan favorite, being offered two separate mega evolutions alongside Charizard in Pokémon X and Y. There was a lot of hype around its return to Smash, and players around the world are getting to grips with its new incarnation as we speak. As I say, it’s much too early to know anything about how it’ll compete, but I’ve always seen it as among the most unique characters in the series and it’s great to see it back.

Don't Starve Together Gets Reign Of Giants Content For Free

Life is Strange: 5 Reasons Why this Game Became a Huge Disappointment

Author Marta BrancoPosted on October 27, 2015January 30, 2017
Life is Strange finally achieved the inevitable with its fifth and last episode Polarized. If some had doubts that Life is Strange was doomed...
Read More

Author JorinPosted on July 9, 2015January 30, 2017
Since its announcement and teaser trailer at this year’s E3, IO Interactive’s upcoming HITMAN has had fans scratching their heads. Due in part to some...
Read More

Author NicolePosted on January 26, 2016January 9, 2017
The typical moral-based fight between good and evil is one that sneaks it’s way into most genres throughout a mass of differing medias. Usually...
Read More

Author Marta BrancoPosted on February 19, 2014October 13, 2019
The Walking Dead: Season Two was released back on December 2013 and the second episode is estimated to come out soon. Recently, Telltale Games...
Read More