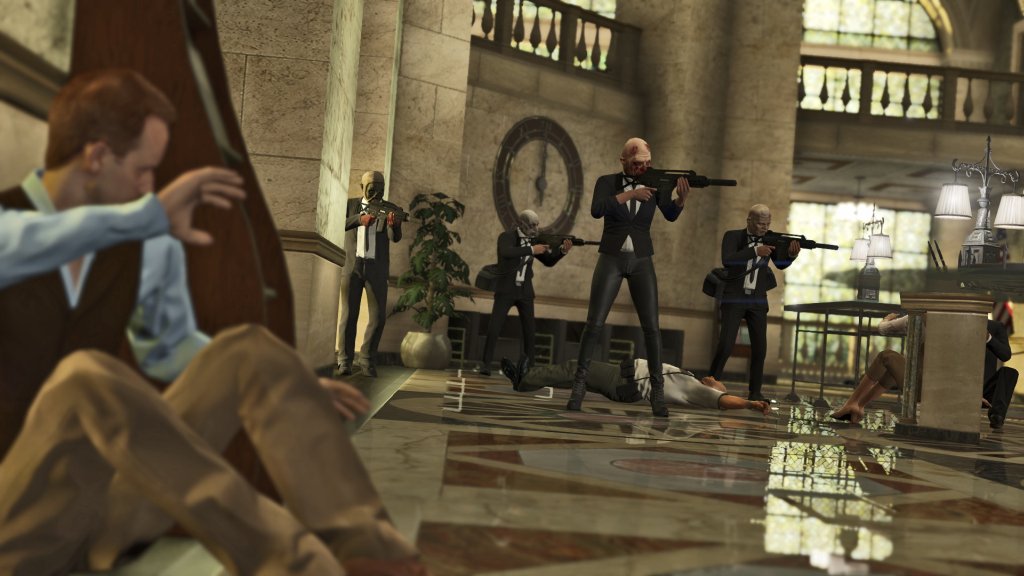 It’s taken just over a year but Rockstar have finally delivered what is considered by many as one of the major selling points of their five star title GTA V and that is its multiplayer Heists feature. March 10th was the date set where everybody would be greeted into the world of criminal professionalism and an installation update of up to 4GB was the first hurdle of gaining access to this new feature. Although a grueling wait filled with eager anticipation to get hands on with the testosterone fueled heist action, you could only assume that an update to that extent of memory was worth the wait, and the verdict to that is yes, it is definitely worthwhile.

As with every new GTAV multiplayer update package, we are presented with some nice new toys to play with. These include a few new vehicles, a flare gun and a whole plethora of wardrobe items, and gloves! They have answered our calling! Finally I can commit criminal activates with the feeling that I am leaving no trace of my fingerprints behind, or simply look like a hitman badass with glorious black leather gloves, not to be mistaken for some form of sadomasochism enthusiast of course…

As expected the Rockstar servers are still a bit iffy but as when the initial GTA 5 multiplayer was released, I’m sure this will be cleared up within the coming days. Once in a lobby you first receive a call from your old pal Lester who remains his wonderfully disturbed self from the campaign. It is a nice return to that tone and style of GTA’s world, it feels as though you are meeting up with an old colleague as you visit his warehouse on the east side. He then gives you the grand opportunity to get on board with one of his high end jobs and play a role in his core crew’s schemes which is indeed heists. Now in order to lead/host a heist you must be at least level 12 and own a high-end apartment property. You’ll find that Lester has sent some guys over to your apartment and refurbished one of your rooms for heist prep and planning. Here you can host heists and manage a crew with three other players.

Lester guides you on the initial two-man tutorial mission where you and a friend are required to drive to a Fleeca bank as Lester hacks into their security to scope out their system and layout. This is known as a setup mission. Similar to the campaign, heists will require some preparation, be it a required vehicle or simply some reconnaissance. All these setup missions are required to ensure that you can proceed with the actual heist or finale as it is referred to. Players are assigned specific roles in heists, for example, during this heist the driver is required to get to the bank while the ‘driller’ delves through a series of hacking mini-games in order to open the vault. Once they have arrived, the driver must deal with crowd control as the driller goes into the vault and drills open a safety deposit target box. It is a good way of giving players assigned roles in which they know they can be depended on to complete without confusion, everyone has a job to do.

Once I had completed this I was rewarded $169,000 to which I discovered the potential of how much money players can earn on heists. Receiving a second call from Lester about an upcoming job, I dived straight back into it with a few buddies as we began The Prison Break mission. Here you are tasked with four setup missions: collect a bus, plane, car and take out some lawyers. Once these are completed you can proceed to rescue a man named Rashkovsky from the state penitentiary and it is a pretty thrilling experience. I was assigned the role of the pilot to which I was required to collect the crew and objective for extraction. Two players pose as a prison guard and prisoner in order to infiltrate the prison and reach Rashkovsky while another player works as a demolition expert and clears the runway of any incoming harrier jets and law enforcement individuals. If you have a microphone I would recommend using it as communication is a big help when playing, it even advises so in the tips provided on the game’s artistic loading screens.

It is an exciting experience watching an armoured car filled with your crew members head towards you on a runway as they pile in and you take off with your tail fin just scrapping the top of the police car’s siren. Your demolition expert then guards the plane in a chopper on the way out of there to which you all parachute out and regroup on a beach to your success. As one of the first missions this was in all, a very enjoyable experience and was a grand return to a game I hadn’t touched in some months.

I am personally very excited and looking forward to playing more of these heist missions with friends and seeing what else is in store for the future of GTA Online. If you haven’t already, install this thrill ride and call up some buddies and round up a posse, no wait that’s Red Dead Redemption… Gather a crew, yeah.. do that, you won’t regret it.

Why Resident Evil: Revelations 2 Should Have Been Completely Different

OP Or Not OP, That Is The Question: #2- Little Mac

Author Chris LittlechildPosted on May 9, 2015October 8, 2019
Little Mac Ah, Little Mac. The star of NES classic Punch Out!! is one of those second- or third-tier Nintendo characters many have wanted...
Read More

Author EthanSPosted on February 21, 2015October 10, 2019
Ciri Princess Cirilla, better known as Ciri, is one of the main characters in Andrzej Sapowski’s novels.  She is the daughter of Duny and...
Read More

Must Buy Video Games in August 2012

Author VgamerzPosted on August 1, 2012October 13, 2019
Games Usually, the month of August is not known as one of the best in the video games world, at least when it comes...
Read More